US Presidential Debate: Stan Grant Says Trump And Biden Are ‘Two Men Who Would Rather Go At It Than Have A Vision’

in Australia
Reading Time: 4min read
A A

Never miss a thing. Sign up to HuffPost Australia’s weekly newsletter for the latest news, exclusives and guides to achieving the good life.

He said their “personal attacks” and talking over each other during the debate proved they’re “two men who would rather go at it rather than have a vision for the future”.

“It [the debate] told us what we already knew,” Grant said on ABC News 24.

“That this was a deeply polarised and broken country, represented by two men who would rather go at it rather than have a vision for the future.”

Grant said the US is “a country broken in so many ways, a country shouting over each other” and “that’s fundamentally what we got” from the debate.

“This constant interjecting, constant over-talking over each other, it really does go to what we see in a country that is really polarised.

“Donald Trump played to that division successfully in 2016. Joe Biden says he’ll be a president for all, Democrats, Republicans, and unity.

“But what we saw there is fundamentally an indication of what we have seen right large across America.”

During the debate Biden implored Trump to just “shut up” after Trump continued to talk over him.

The debate’s moderator, Fox News’ Chris Wallace, had asked Biden whether he would end the filibuster or expand the number of seats on the Supreme Court if he were elected in November.

As Biden attempted to respond, Trump incessantly interrupted him. 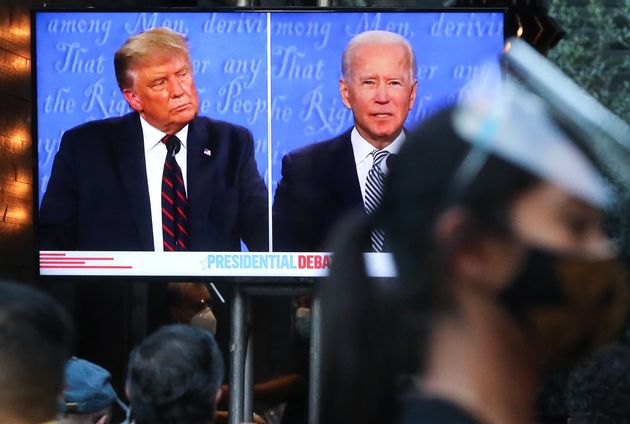 WEST HOLLYWOOD, CALIFORNIA – SEPTEMBER 29: A server wears a face shield and face covering as people sit to watch a broadcast of the first debate between President Donald Trump and Democratic presidential nominee Joe Biden at The Abbey, with socially distanced outdoor seating, on September 29, 2020 in West Hollywood, California. The debate being held in Cleveland, Ohio is the first of three scheduled debates between Trump and Biden. (Photo by Mario Tama/Getty Images) 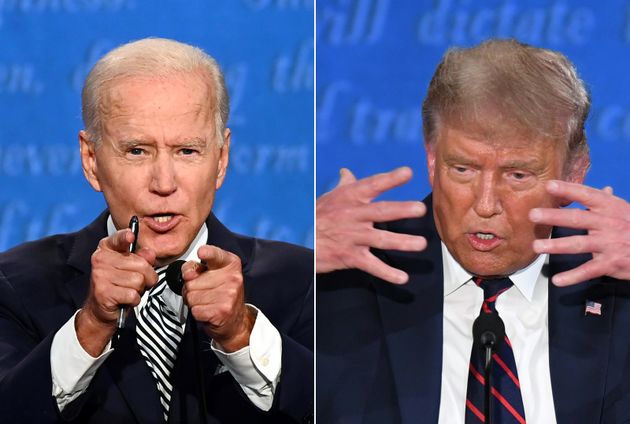 Democratic Presidential candidate and former US Vice President Joe Biden (L) and US President Donald Trump speaking during the first presidential debate at the Case Western Reserve University and Cleveland Clinic in Cleveland, Ohio on September 29, 2020.

After trying several times to answer the question, an exasperated Biden said: “Will you shut up, man? This is so unpresidential.”

Wallace then ended the segment and moved on to another topic.

Wallace had repeatedly asked Trump to stop speaking over others during the 20 minutes leading up to Biden’s outburst.

Trump interrupted Biden 10 times in less than three minutes at one point, according to a Washington Post tally.

Earlier in the debate, Wallace had to plead with Trump to let him ask his question.

Trump fired back: “Well, first of all, I guess I’m debating you not him. But that’s OK, I’m not surprised.”

The second debate is set for October 15 in Miami, Florida, and the third on October 22 in Nashville, Tennessee. Vice President Mike Pence and Biden running mate Kamala Harris are scheduled to debate on October 7 in Salt Lake City, Utah.

With additional reporting by Hayley Miller.

No help for rangatahi Māori hit hardest by housing crisis

‘Tis the season: the best Christmas movies to watch on TV