The Masked Singer NZ recap: Wake me up when it’s all over

in New Zealand
Reading Time: 4min read
A A

And then there were three: Tara Ward recaps the Masked Singer’s penultimate week, including a sexy performance from a very soulful sheep.

Sultana Bran is delicious, and so is the thought that we’re nearing the end of the Masked Singer NZ. This was the costumed warblers penultimate week, in which we discovered the contents of the Pav, Rhys Darby guessed pretend people, and blow me down if L.A.B.’s singers didn’t get two more shout outs from Ladi6. How can we not admire Ladi6’s dedication to L.A.B? If we don’t see L.A.B. mentioned in every round of next week’s final episode and all of L.A.B. revealed to be hiding inside Sheep, it will be a sad day indeed.

Best of all, episode nine finally revealed the judges’ top secret strategy for deciding which masked singer should be eliminated. “Show me your fingers under the table,” Sharyn ordered the other judges, and that’s science for you, just a perfect storm of digits and desks. Show us your fingers, New Zealand, and I’ll show you a pavlova bouncing around the stage to an 80s rock classic. Let’s dive into the sing-off between the final four masked singers: Sheep, Pavlova, Tuatara and Medusa.

Sweet dreams are made of this.

Pavlova finished her crunchy run on the cakestand of our hearts with ‘Never Tear Us Apart’, before the judges tore Pavlova’s strawberry head from her creamy body. Pavlova was actor and singer Stephanie Tauevihi, who played Donna from Shortland Street in the 90s and had nothing to do with cooking despite the thousand of official clues that suggested otherwise. Also, Donna may have married her brother on Shortland Street but she never dressed up as a singing dessert, which proves that life really is stranger than fiction.

3. Tuatara, singing ‘Wake Me Up’ by Avicii 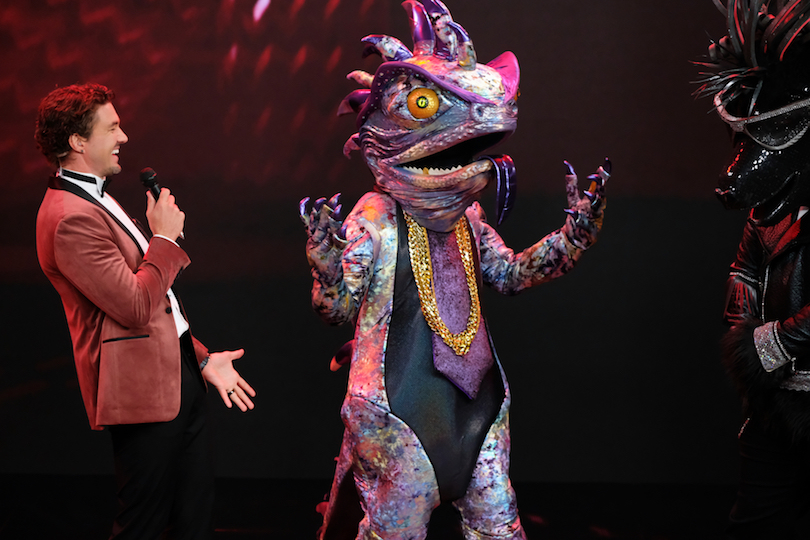 Tuatara sat on the stage and begged to be woken up, but it’s us who need to wake from this fever dream. “If this lizard doesn’t get his own sitcom, then I’m not coming back to New Zealand,” Rhys Darby said, before stating he had no idea who Tuatara was. A clue about shopping, and nobody guessed OpShop? We know it’s you, Jason Kerrison, don’t be sad. What a delightful performance this was. The audience clapped in time and the snakes on Medusa’s head wobbled like they’d never wobbled before. Ladi6 raised her hands skyward, while behind Medusa, four dancers in spangly dresses twisted and twirled to the beat, their inner serpents desperate to break free. The judges were still confused about who Medusa was. “Dusa, dusa, dusa,” Medusa’s snake hat hissed at the judges, “Fuck’s sake, it’s Joe Cotton.”

1. Sheep, singing ‘Let’s Get It On’ by Marvin Gaye Look, this performance won’t do New Zealand’s reputation as sheep shaggers any favours, but Sheep’s smooth performance of this Marvin Gaye classic made me fall in love with him, big time. With every soulful note I could see my future in his sunglasses, every bounce of his curly hair made me want to get a perm. Boing went Sheep’s hair and boing went my heart, until it was over and I was just sitting alone in my lounge again, wishing on a sheepy dream.

Cheat sheet: How is NZ Post preparing for the future of delivery?

Cheat sheet: How is NZ Post preparing for the future of delivery?

Singing the news: How our stories (and our gossip) were shared through waiata