The Covid vaccine was tested on animals. What does that mean for vegans?

Early trials of every approved Covid-19 vaccine involved giving them to animals. Ethicist Ben Bramble explains why vegans have a legitimate right to be upset about this – but why they should get the vaccine regardless.

Some of my vegan friends are reluctant to get the Covid-19 vaccine. These vaccines do not contain animal products, but animals were used to develop and test them. For instance, early trials involved giving the vaccines to mice and macaque monkeys. So my friends say they feel uncomfortable having a product that uses animals in these ways.

I am very sympathetic to their concerns. Animals are treated appallingly in the production of many goods and in many areas of life.

Nonetheless, I believe vegans can get the Covid-19 vaccine in good conscience. Let me explain why.

Getting the vaccine prevents harming others

A key feature of Covid-19 is you can catch it and pass it on without even knowing you have it, despite your best efforts to avoid this.

This means there is an important difference between avoiding products like shampoos and cosmetics tested on animals and not getting the vaccine. Doing the former doesn’t put anyone else at risk. But doing the latter does.

Even most fruit and vegetables are grown in a way that kills or displaces wild animals, uses fish meal and blood and bone to fertilise plants, or requires killing ‘pests’ like mice to protect crops and grain stores (Photo: Getty Images)

Let’s start with fruit and vegetables versus cosmetics

Vegans acknowledge it is virtually impossible to avoid contributing to animal harm entirely. Even most fruit and vegetables are grown in a way that kills or displaces wild animals, uses fish meal and blood and bone to fertilise plants, or requires killing “pests” like mice to protect crops and grain stores.

Many vegans therefore distinguish between animals harmed in this sort of food production, and animals harmed more directly by the meat and dairy industries, as well as in the production of consumer products such as cosmetics.

What is the right basis of this distinction? One possibility is the latter group of animals are killed or harmed directly, as a means to an end, whereas the former group suffers harm as a mere by-product or side-effect of other processes.

But this cannot be the right basis. Killing animals for use in fertiliser or as pests is direct killing.

A more plausible basis for the distinction is unavoidably killing animals in the production of things that are necessary or clearly worth it. We need to grow large amounts of fruit and vegetables. And we cannot — at least, given current technologies — do so without killing some animals along the way.

But we do not need to consume meat or dairy, or wear animal-based clothing or cosmetics tested on animals. There are plenty of excellent alternatives.

So, in ethical terms, which of these products is a Covid-19 vaccine most comparable to: fruit and vegetables, or cosmetics tested on animals?

I think they are more like fruit and vegetables. Covid-19 vaccines are necessary — there is no other credible way out of this devastating pandemic. And the animal harm involved in developing and testing these vaccines was unavoidable. There was no reasonable alternative available, at least not without making big sacrifices in terms of how long we have to wait for vaccines to arrive.

For this reason, I think even though the vaccines used animals directly, their use under the circumstances was permissible, and so vegans can get these vaccines in good conscience. 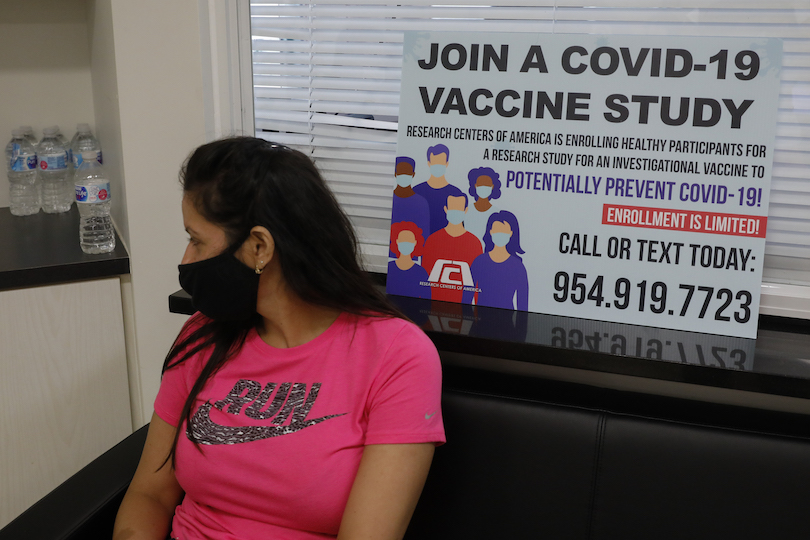 A volunteer at a clinical trial for a Covid-19 vaccine in Florida in September 2020 (Photo: Eva Marie Uzcategui/Bloomberg/Getty Images)

Why can’t we test on humans?

Some might argue there is an alternative to using animals to develop and test these vaccines — using humans instead, in “human challenge trials”, where volunteers are exposed to the virus in lab-controlled conditions. In fact, the United Kingdom has just given the green light for this type of trial to go ahead for later stages of the testing process.

If we allowed humans to volunteer to be involved at earlier stages of the development and testing process as well, some might put up their hands for this, too. While human challenge trials face serious moral issues, it might be ethically preferable to use consenting humans rather than unconsenting animals.

But involvement at these earlier stages may be so dangerous too few people would volunteer, or we should not allow them to take part. Still, this is a proposal worth considering further.

But I still feel too awful

Some vegans might accept my reasoning but find they just cannot bear to use a vaccine tested on animals.

To these people, I would say: it is perfectly understandable and reasonable to feel uncomfortable about getting the vaccine for this reason. It doesn’t follow, though, that you shouldn’t get it. If the only way to save the planet or your fellow humans is to kill an animal, you should do so even if it is incredibly emotionally hard to do so.

Even so, if as a vegan you simply cannot bring yourself to get the vaccine, this won’t make me grumpy in the same way it makes me grumpy when I hear others — for example, anti-vaxxers motivated by conspiracy theories — say they won’t get vaccinated.

Your reluctance to get the vaccine is rooted in a legitimate grievance about human mistreatment of animals more broadly.

By contrast, people who refuse to get vaccinated because they think Bill Gates is hoping to microchip humanity have no such legitimate grievance behind their aversion.

Experts widely predicted a pandemic would happen sooner or later. Many believe it was a direct result of human activity — indeed, mistreating animals.

Moreover, the fact there aren’t good alternatives to using animals in development and testing is due largely to society’s failure to properly explore and fund such alternatives earlier.

Nevertheless, under current circumstances, our need to use animals to develop and test these vaccines is real. So, the correct path is not to reject Covid-19 vaccines. It’s to reluctantly accept them and lobby hard for better treatment of animals.

This article is republished from The Conversation under a Creative Commons licence. Read the original article.

A short list of the ‘wokesters’ Simon Bridges should target next

Highlights: Game of three halves for Blues, Crusaders and Chiefs in final preseason hit out