in South Pacific Islands
Reading Time: 7min read
A A

On Oahu, people love to complain about Town. Normally, it’s people not from Town (a blanket term for the South Shore), but nonetheless, when it comes to Town-surf—it’s a trendy thing to do. “It’s sooo lully,” they complain. “Sooo crowded,” they grumble. “Parking was nuts!” they exclaim.

“The water is too brilliantly turquoise, with a temperature not unlike being in mother’s womb as a prenatal babe.” Or: “The multiple rainbows that shimmer in the residential valleys between precocious, passing showers are distracting in the tube,” is another common grievance.

When Backdoor comes to the South Shore…you sure as hell better bet on Torrey Meister finding that special grower. Photo: Keoki

See, we’re a little spoiled out here, if you can’t tell. Regardless, this recent swell to hit the South Shore — the largest one by far of the summer season — gave even the most Pessimistic Patricks, nothing to complain about.

Come Monday, basically everywhere was cranking. Zeke Lau said he spotted a solid six-foot [Hawaiian (duh)] set mow through the lineup at Kewalos when he arrived that morning. Rare Outer-Waikiki waves like Castles even broke, not to mention a more cherished, unnamed lefthander east of that, which had its windows, tide-depending. 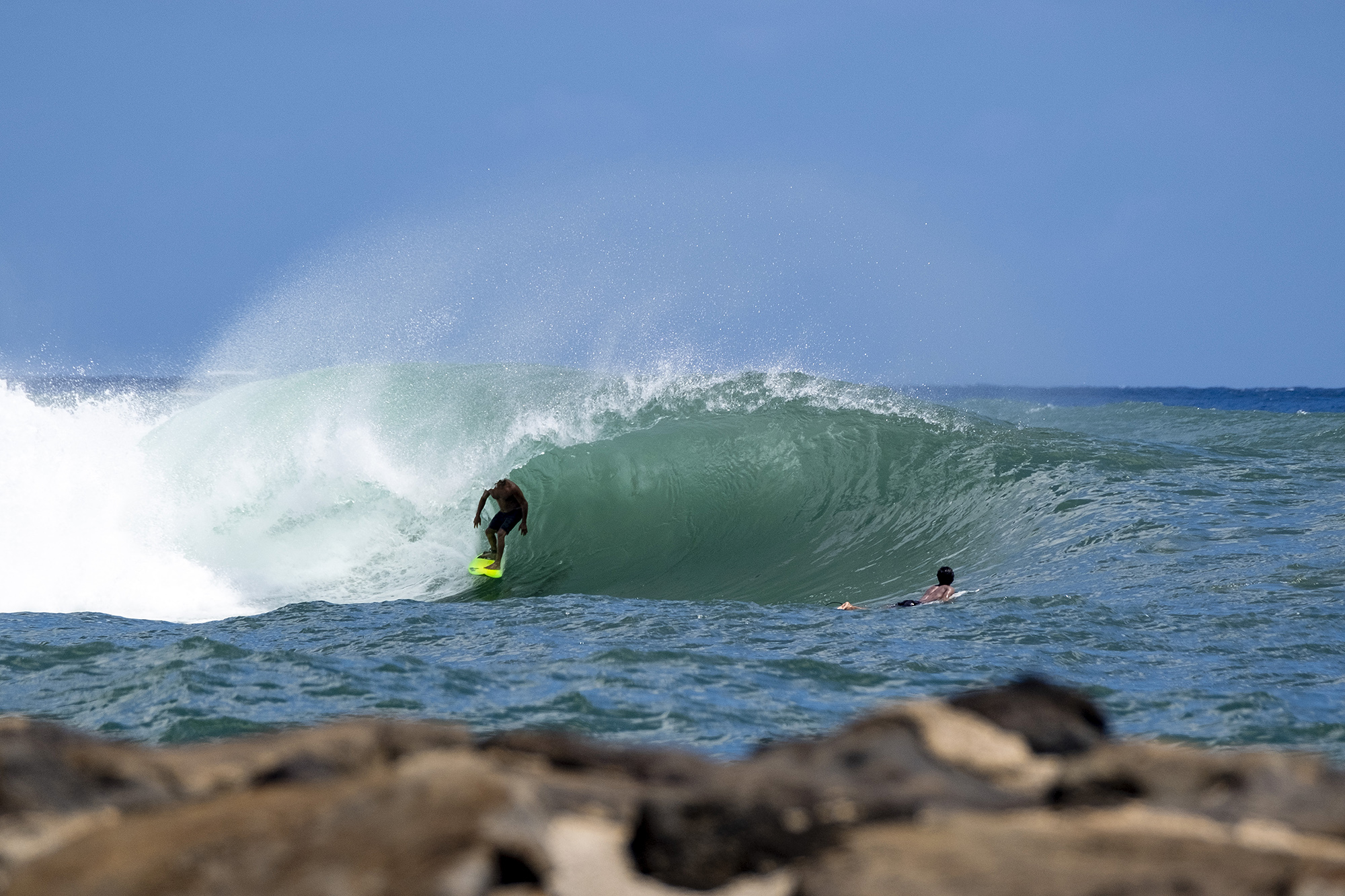 The pecking-order at Ala Moana Bowls can feel a lot like Pipeline at times. Davey Boy Gonsalves [pictured here] has been at the top of the food chain at Bowls, though, for a minute now. Photo: Keoki

Bowls was…well, Bowls. THE marquee wave of Town and responsible for more Cam-Rewinds of random lucky dawgs getting blown out into the channel than any other wave on the island. 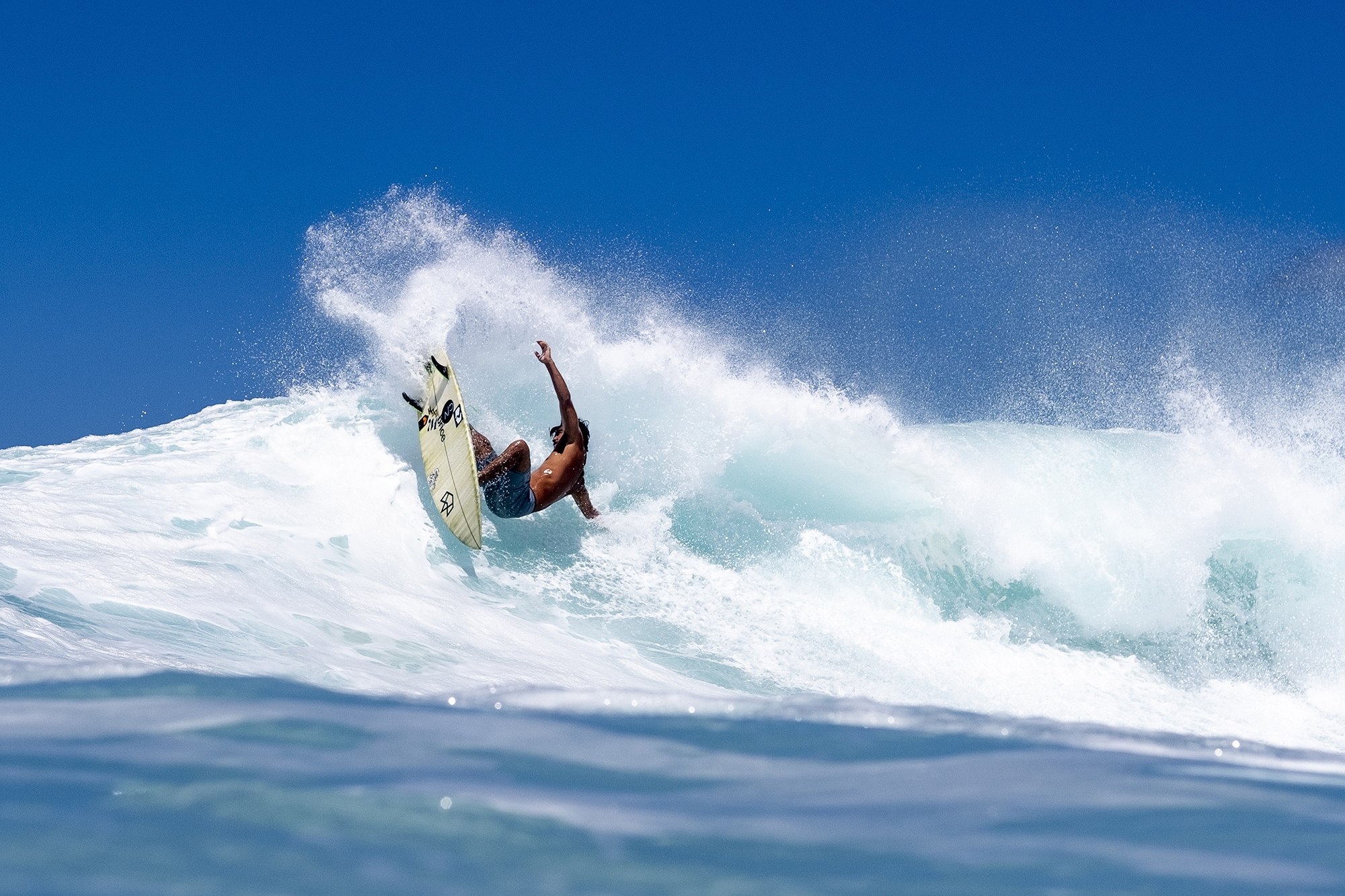 Cedric Wong, doing his best Marzo on a frothy inside bowl. Photo: Keoki

“The strongest swell of the season – thus far – has graced the southern shores of the Hawaiian Islands the past few days thanks to a good looking storm that set up shop a little over a week ago,” explained Surfline’s Director of Forecasting Kevin Wallis. “This storm came out of the Southern Ocean and took an excellent track as it entered the Pacific with a strong south to north fetch on the east side of New Zealand. Unlike most of the other storms and resulting swells this season – which have been fun but better aimed at zones east of the Aloha state – this storm was aimed quite well at the islands. Furthermore, the low had nice high pressure support on its western flank, generating wind in the 35-50 knot range and seas in excess of 40 feet.” 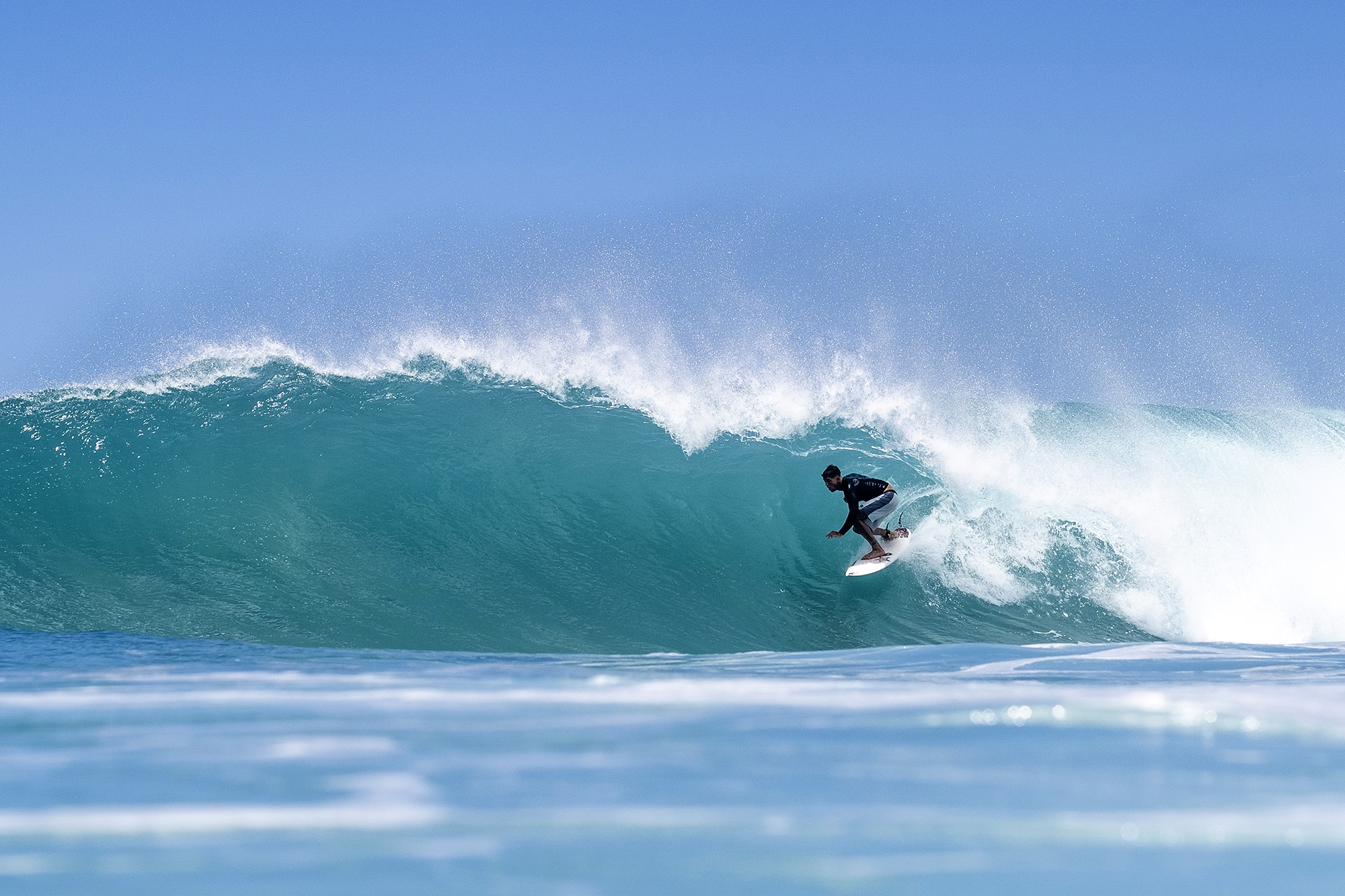 Kewalos is a wave that’s technically bred more amateur AND world titles (hi, Carissa) than any other wave on the island. If there’s any surfer in the world that has the place more down: it’s Zeke Lau. What’s funny, is usually, most people battle over the left. Photo: Keoki

As the following images show: surfing Town in the summertime on a solid Southern Hemi should be the reason NOT to complain. Hopefully, the original trend’s on the way out.

Also…psst…psst…after the swell declined on Tuesday, Wednesday showed a considerable backup pulse from the SSE. Score! 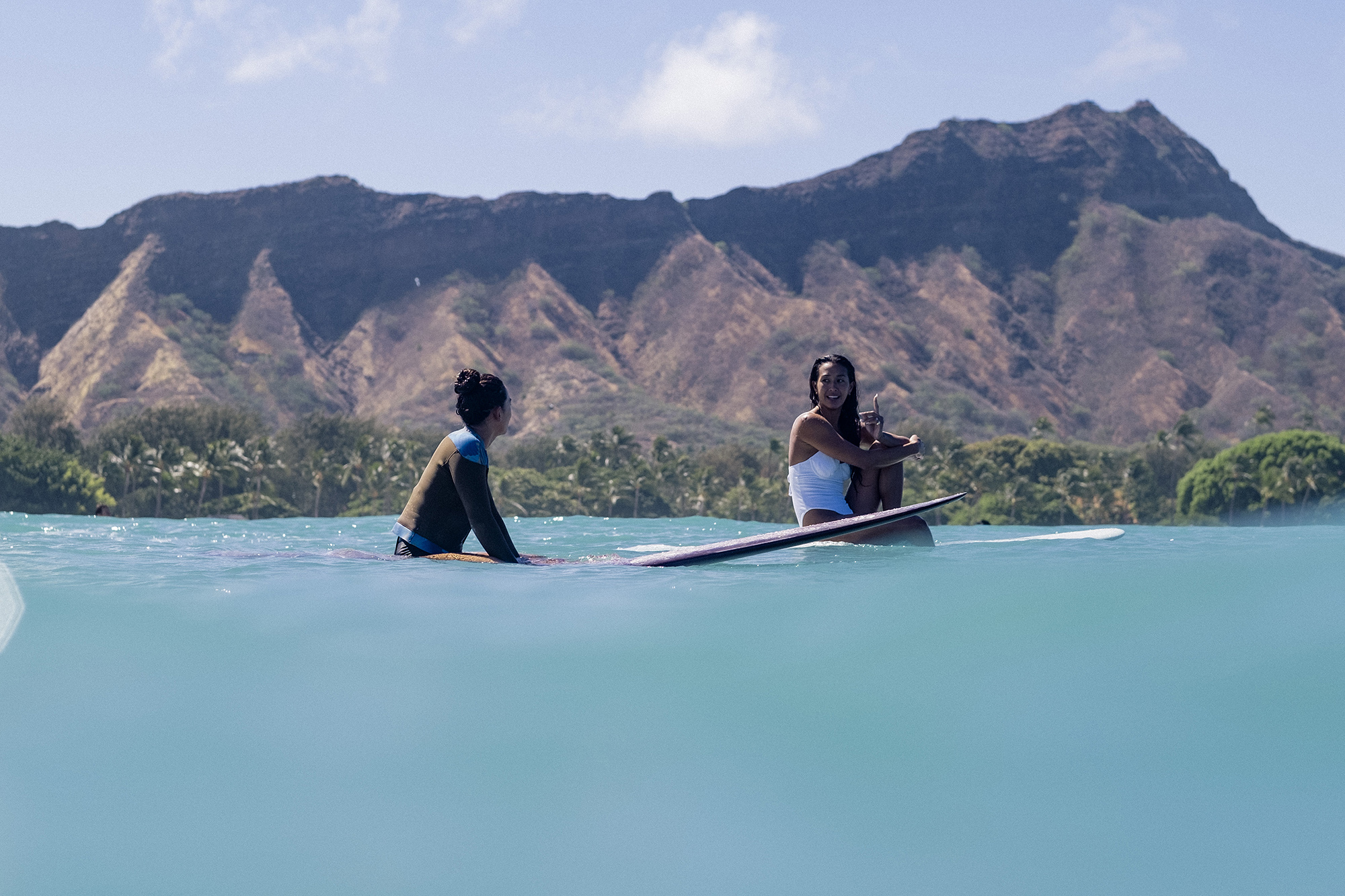 Kelia Moniz and Rosie Jaffurs, talking story during one of this past swell’s rare lulls. Photo: Keoki 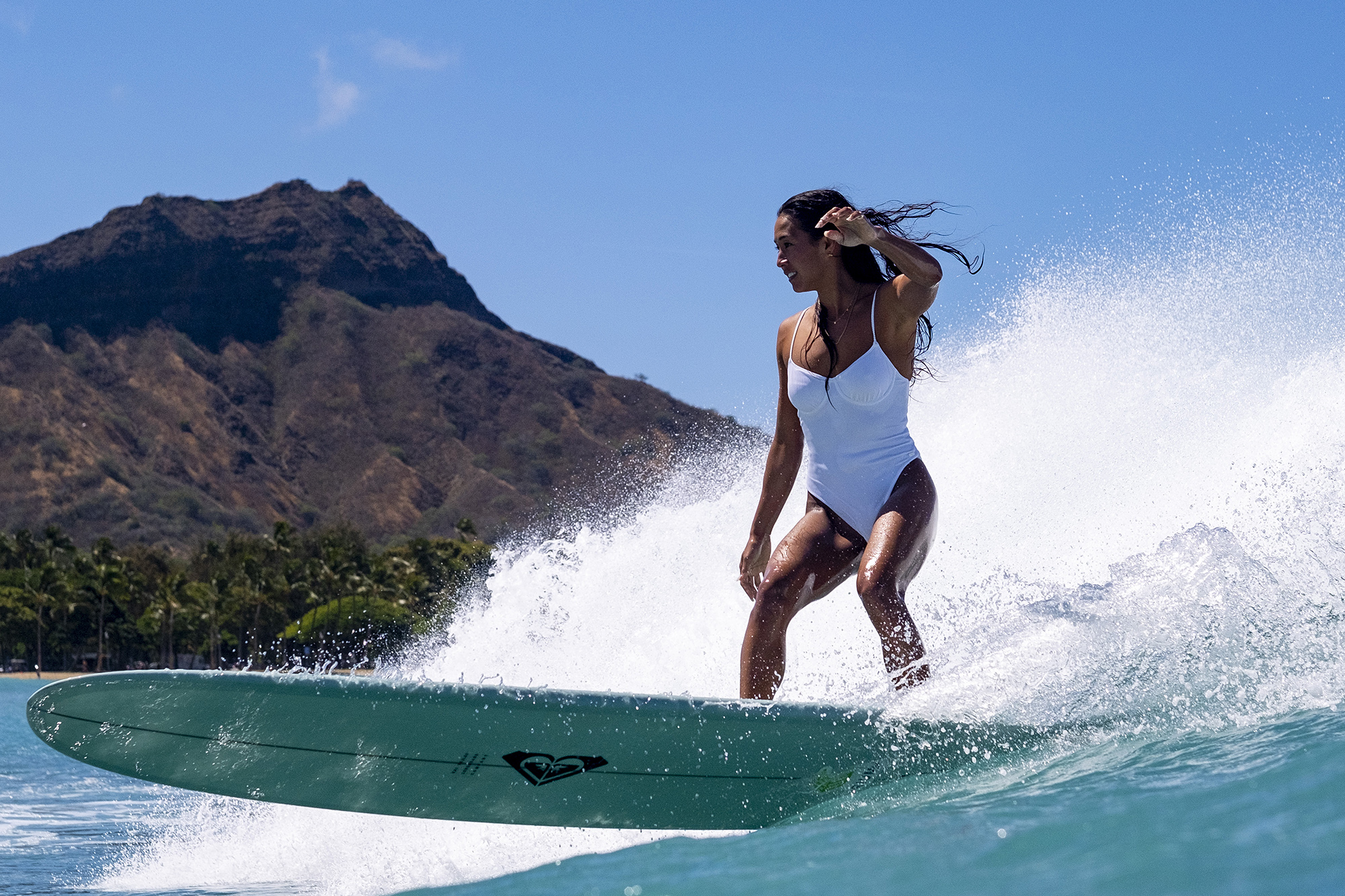 Kelia Moniz, on another postcard worthy frame from Queen’s in Waikiki. Photo: Keoki 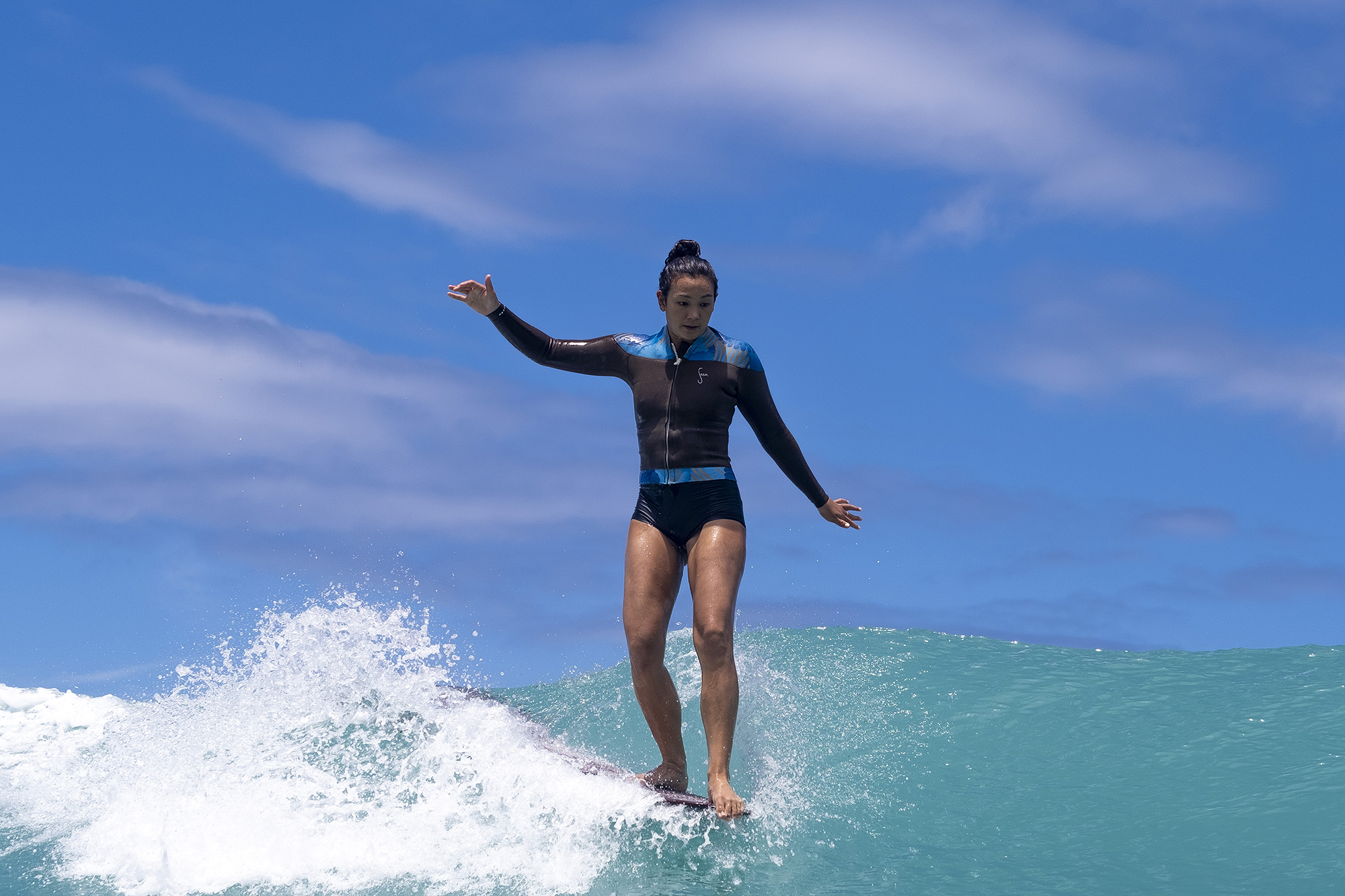 Rosie Jaffurs, five-toes over, in the birthplace of the sport. Photo: Keoki 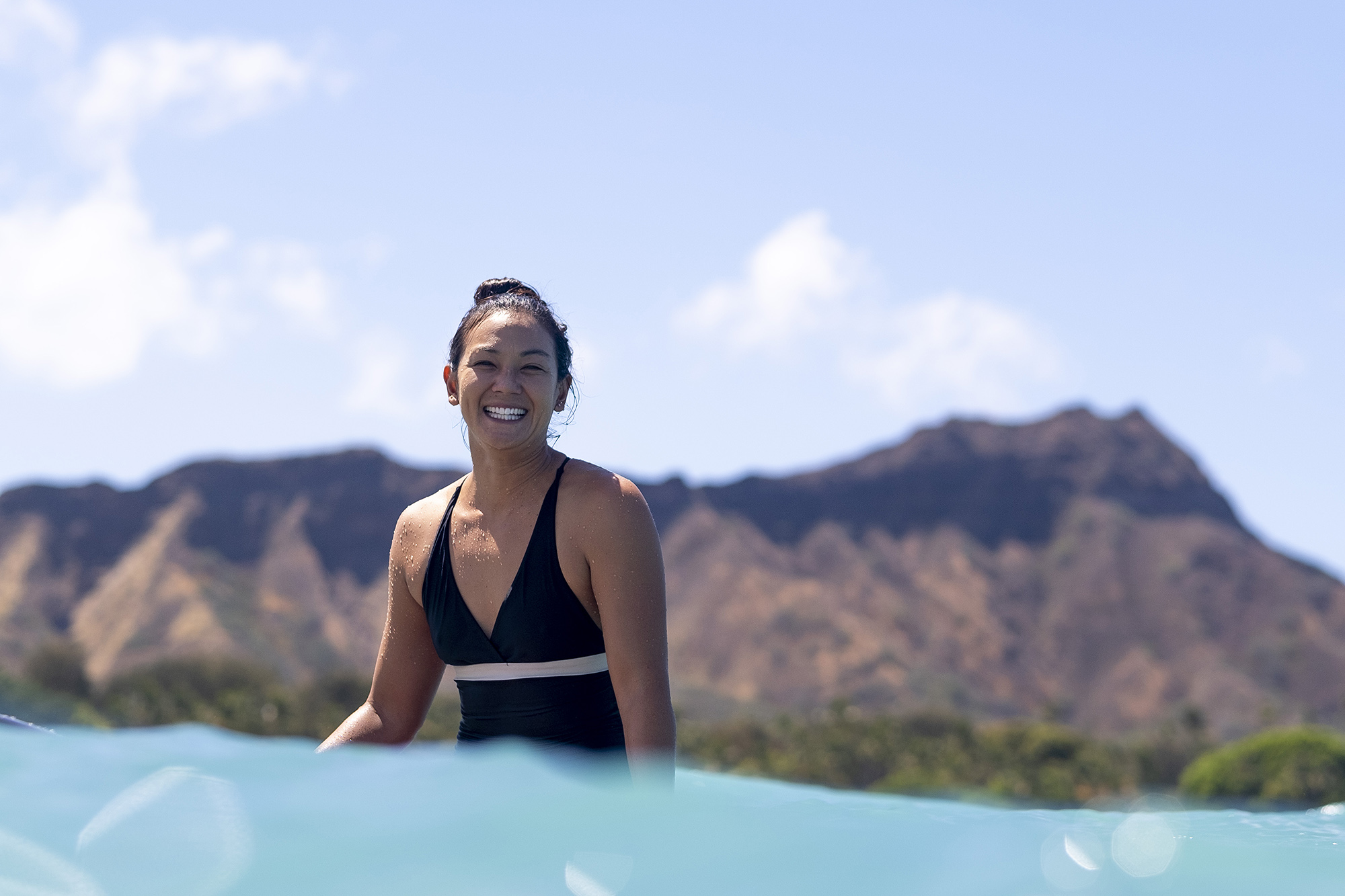 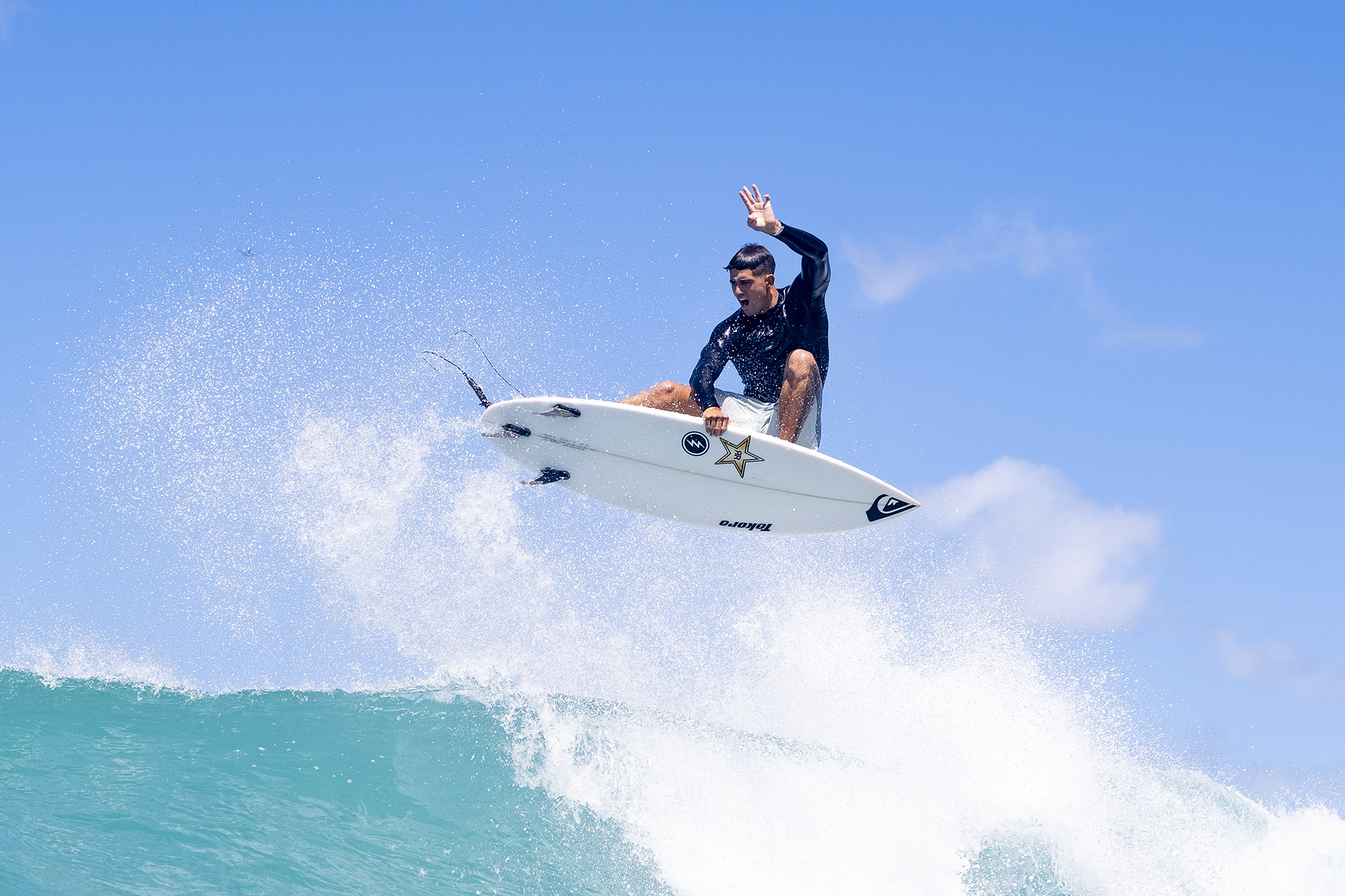 According to a filmer close to Zeke Lau [pictured here], his recent excursions to wavepools the world-over have gotten his landing rates to unreasonable percentages. At home, Kewalos is just the place for Zeke to crunch the numbers. Photo: Keoki 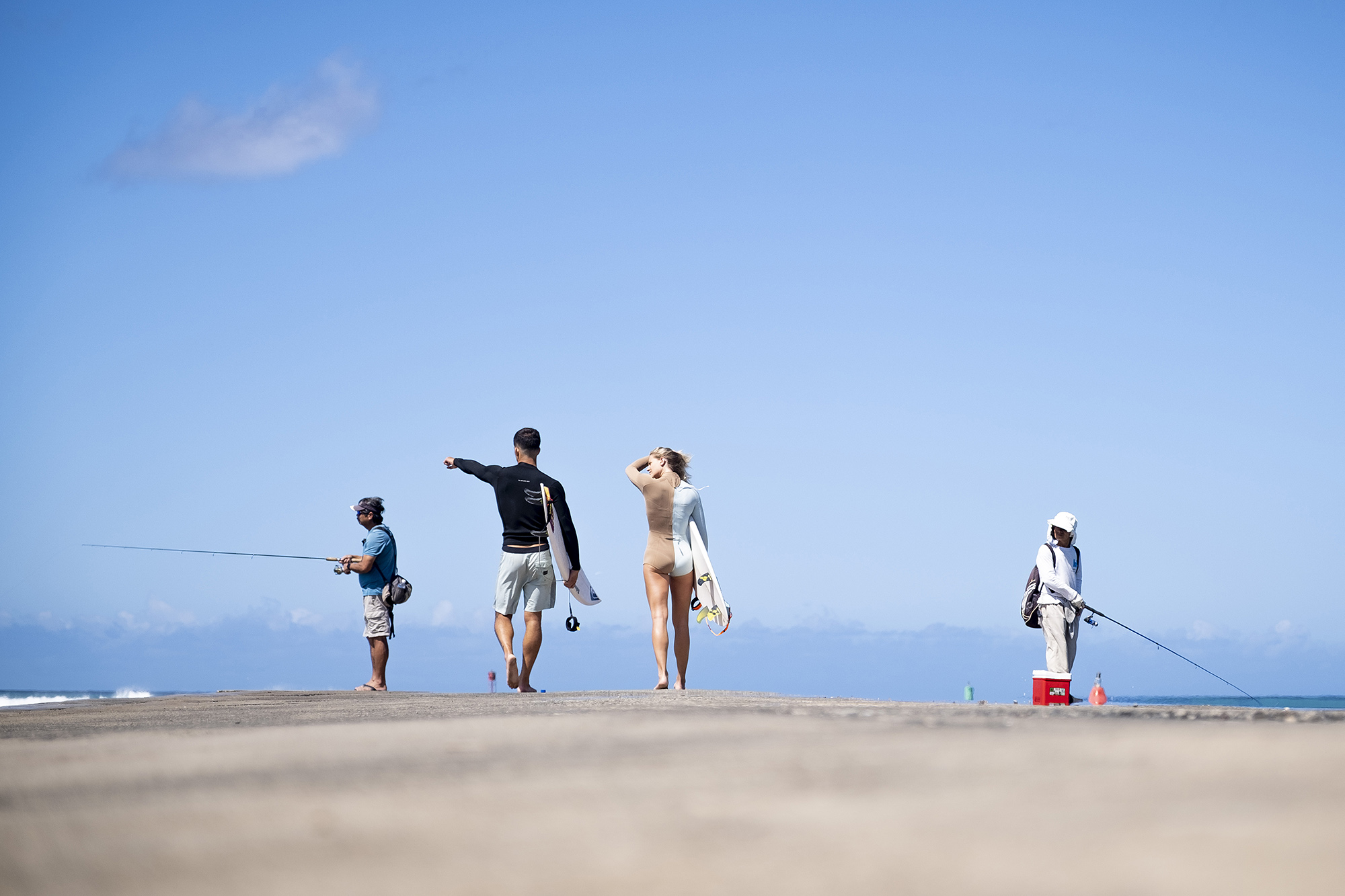 Zeke Lau and Jenna Bleu, out for a mid-afternoon stroll on the Kewalo Basin jetty. Photo: Keoki 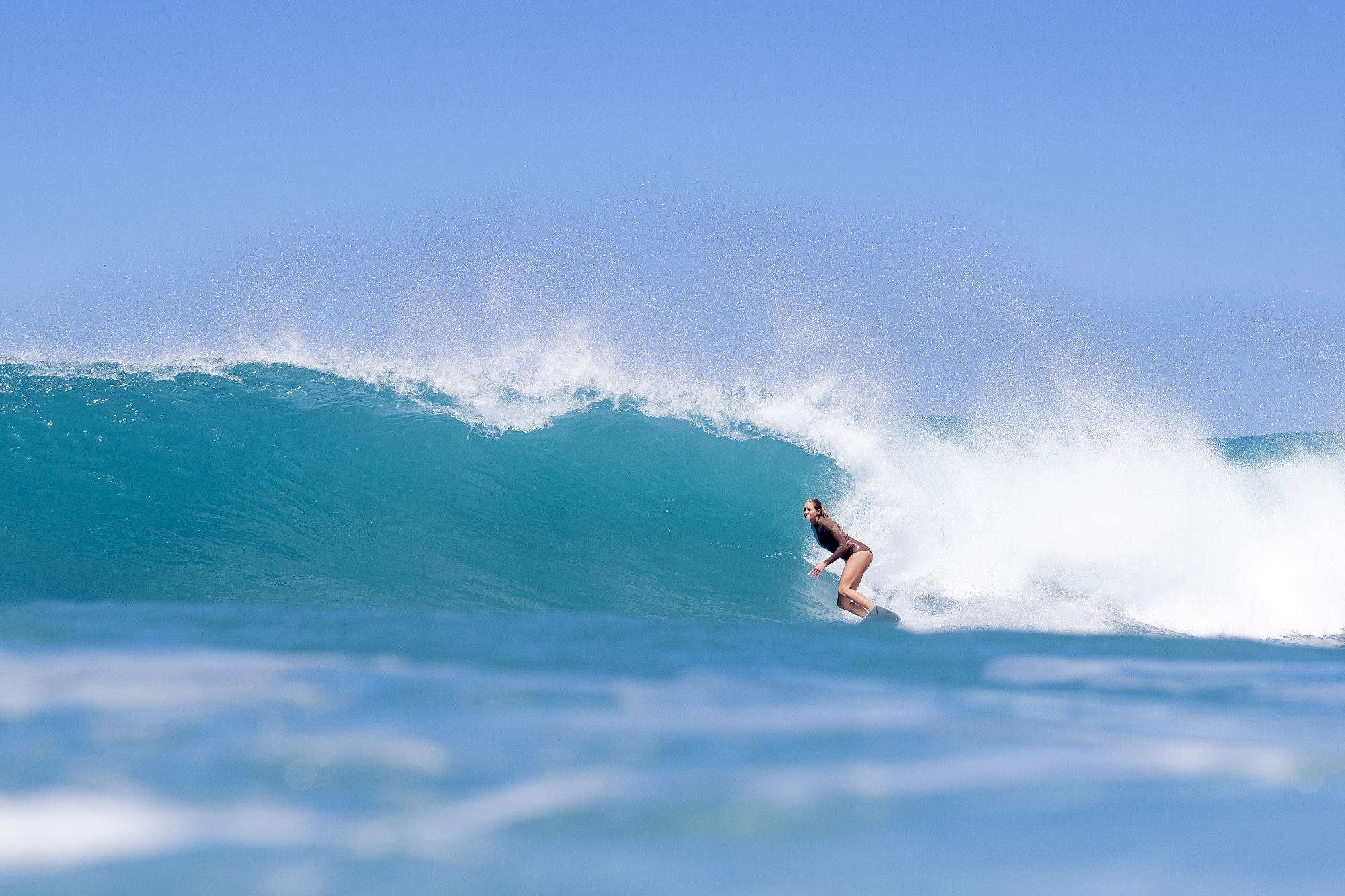 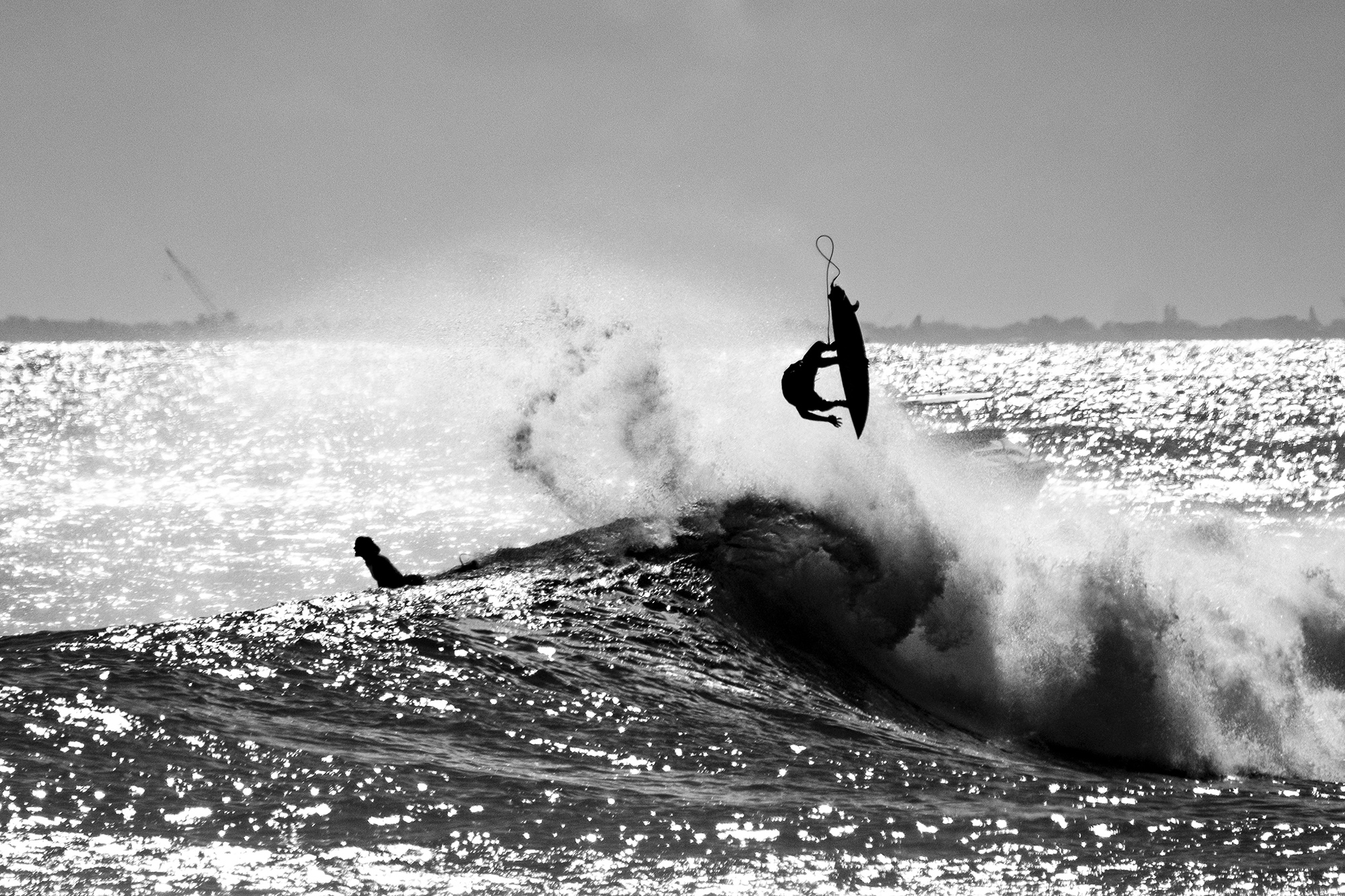 Kaito Kino, mid-rotation through his third session of the day. Photo: Keoki 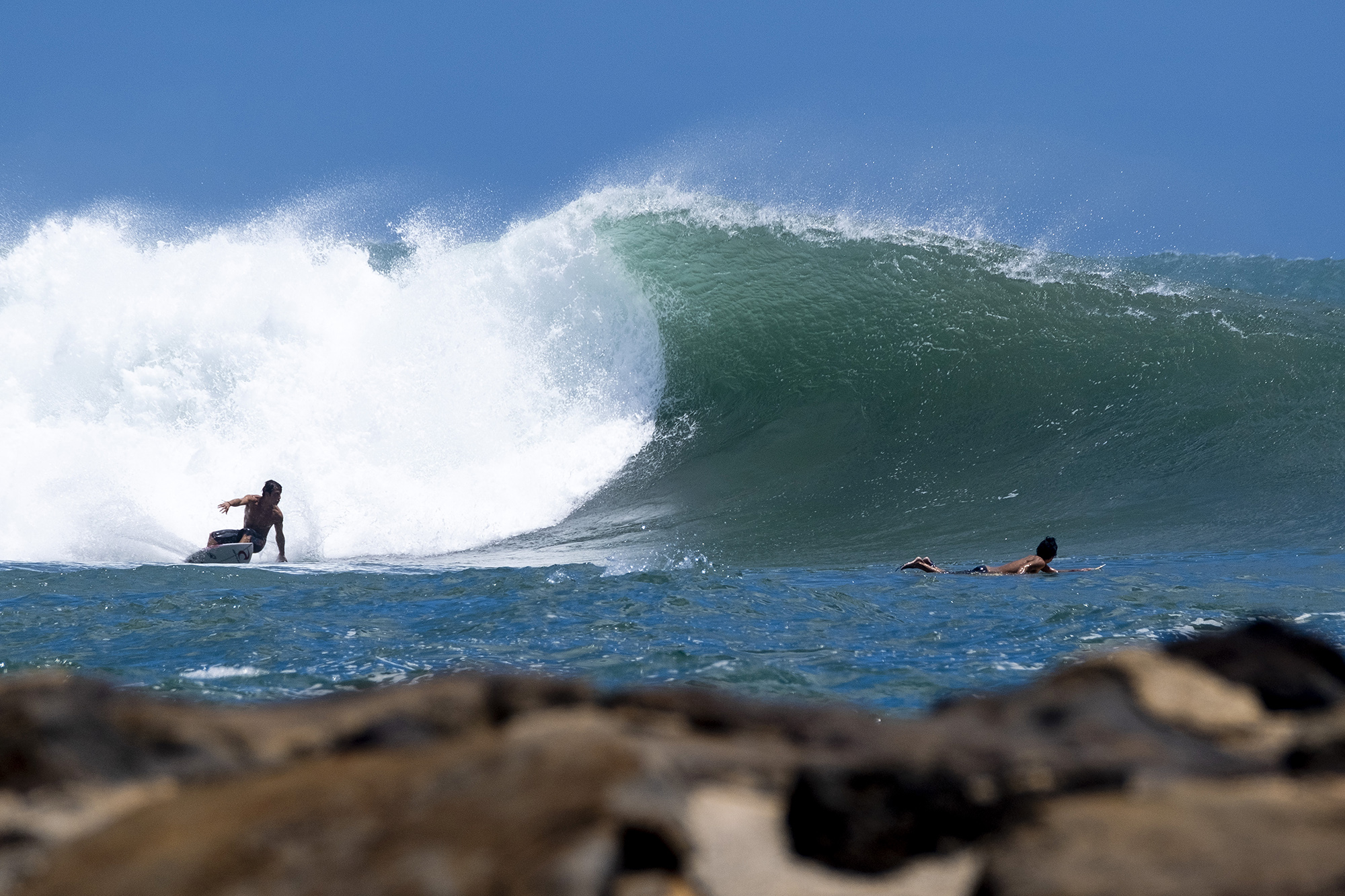 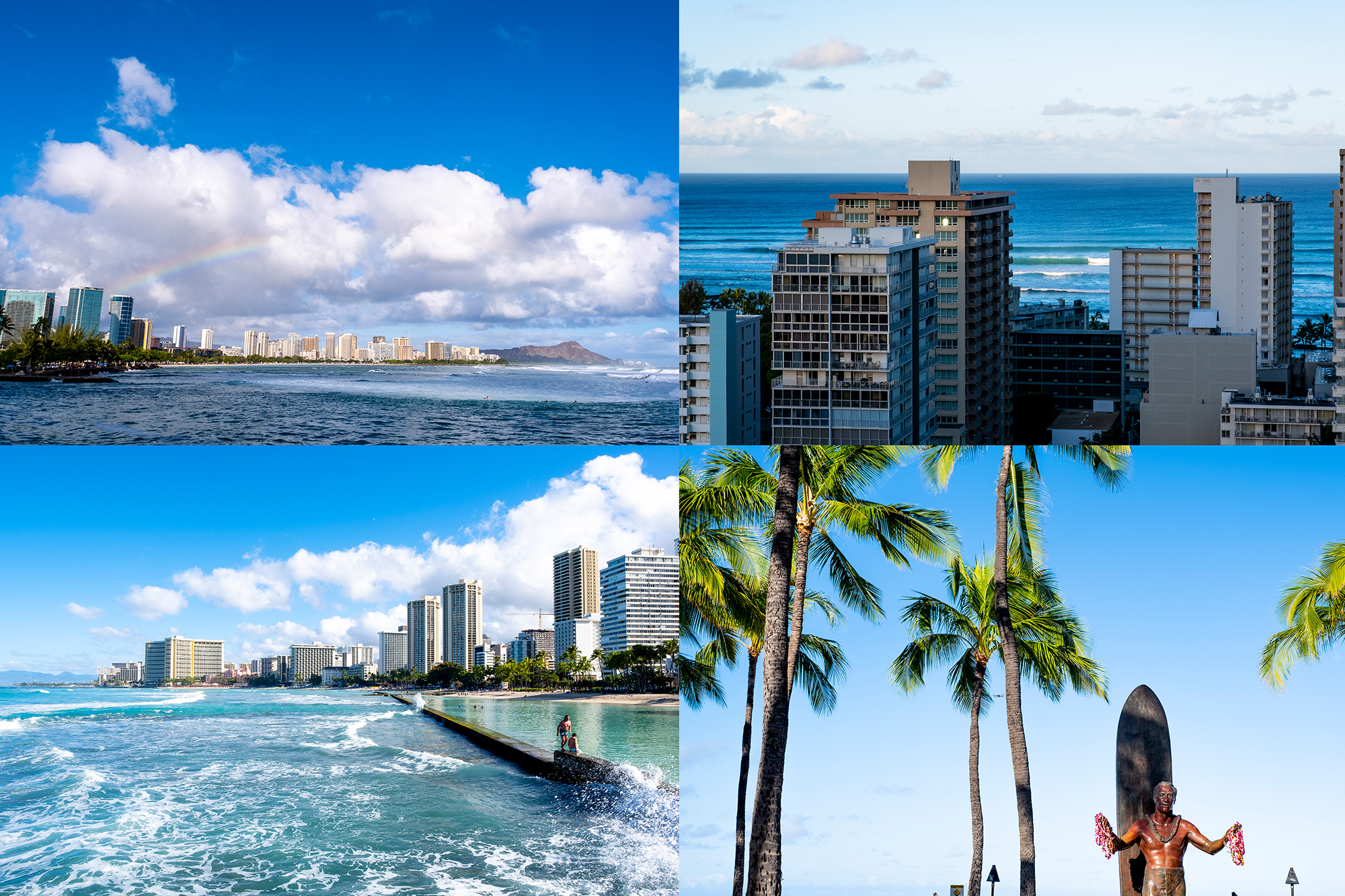 Town. What’s there to complain about on days like these? Photos: Keoki 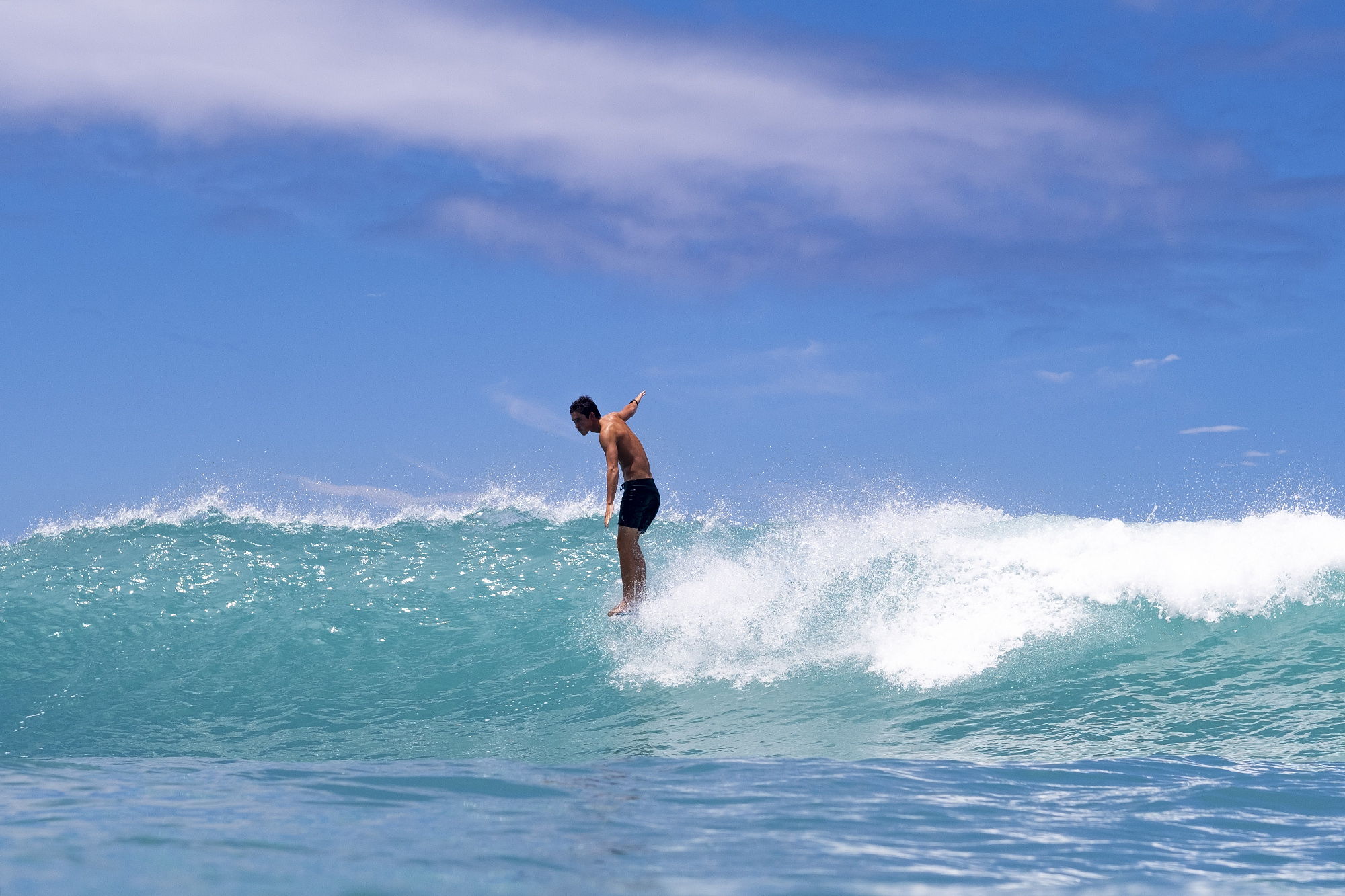 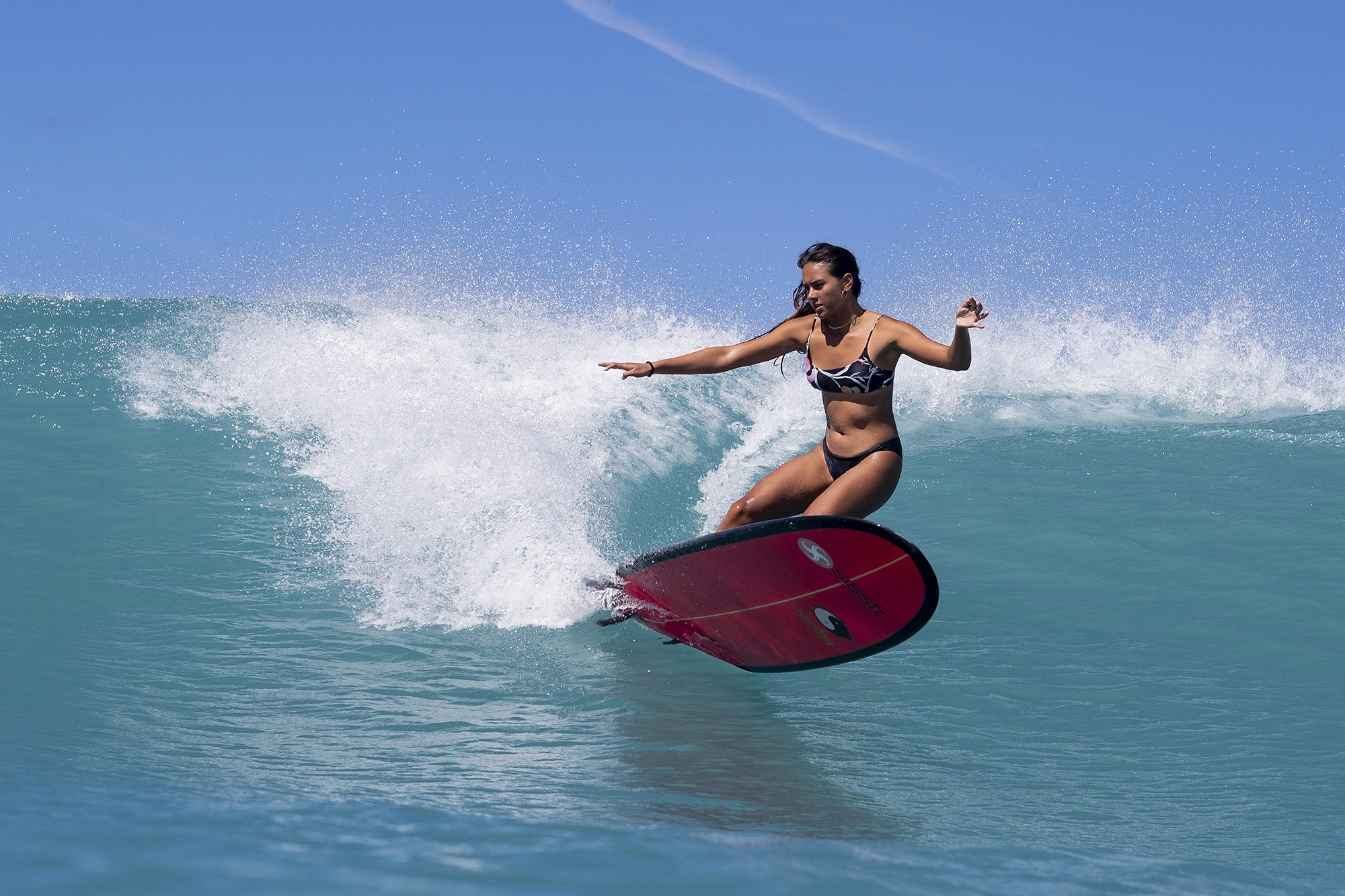 Tiki Willis, whipping around that LB like a bawse. Photo: Keoki 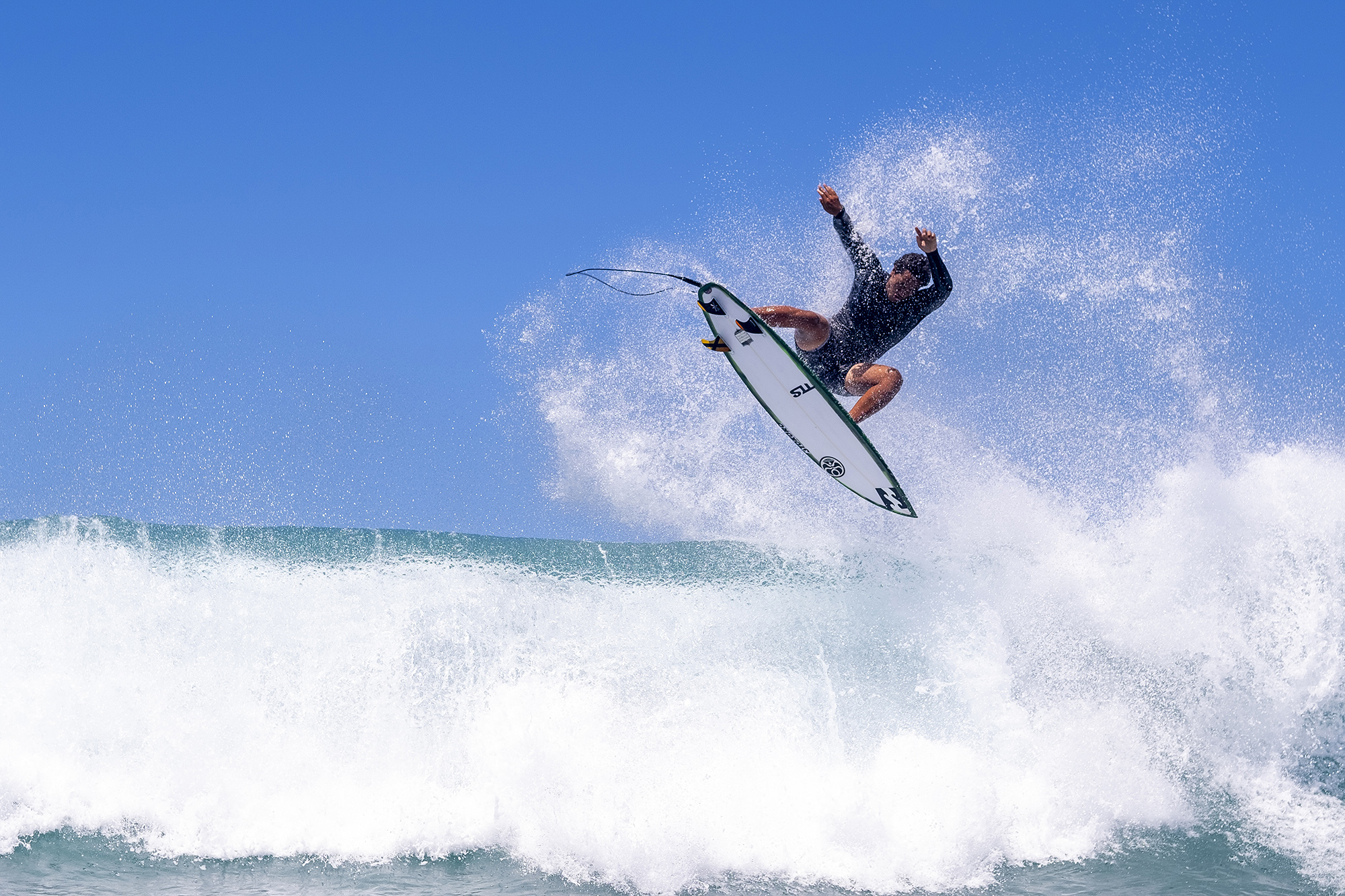 Josh Moniz on why Kewalos is his go-to spot. Vid: Beau Flemister 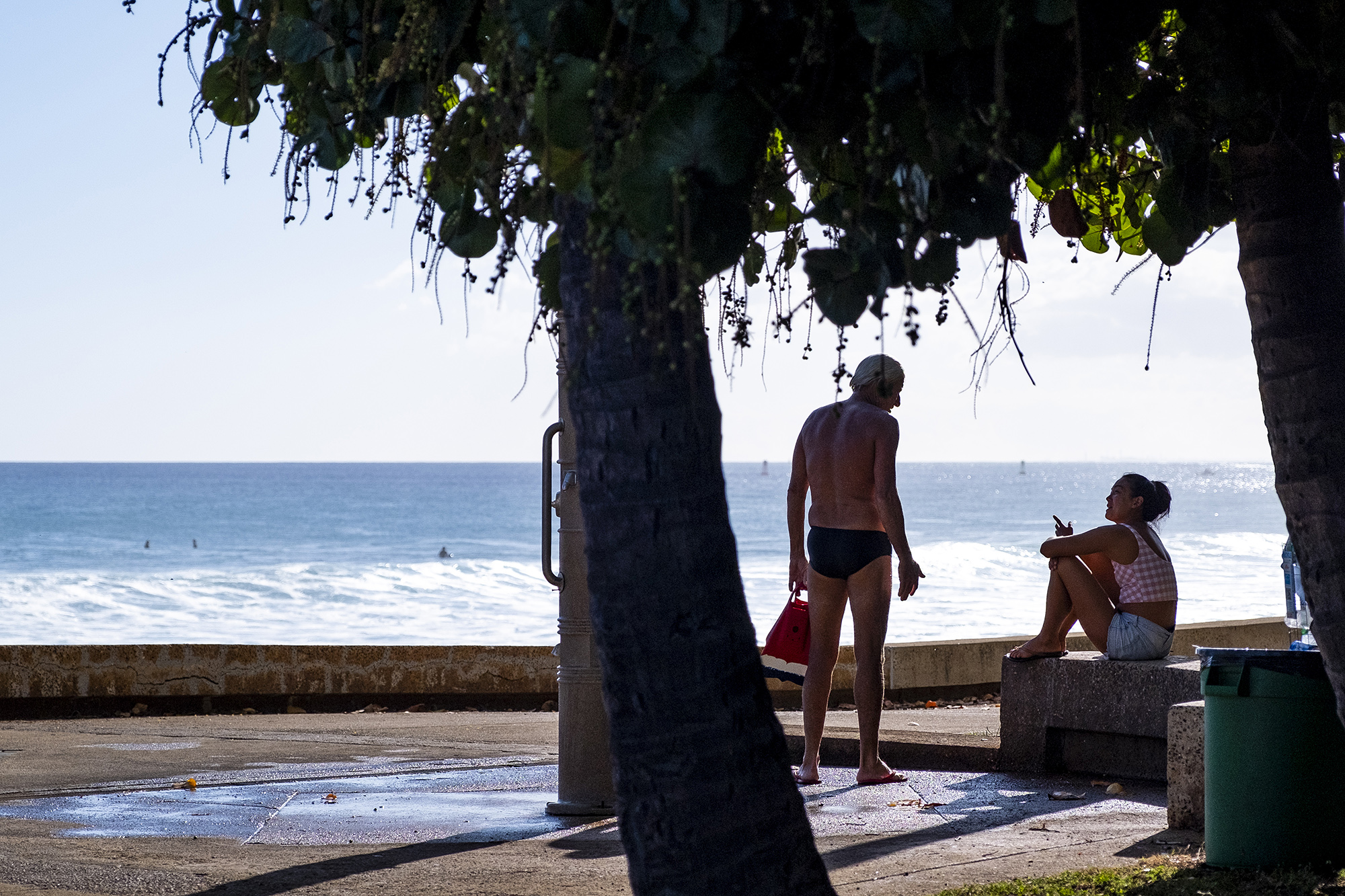 Read More: How Bodysurfing Can Help Your Your Surfing, With Mark Cunningham 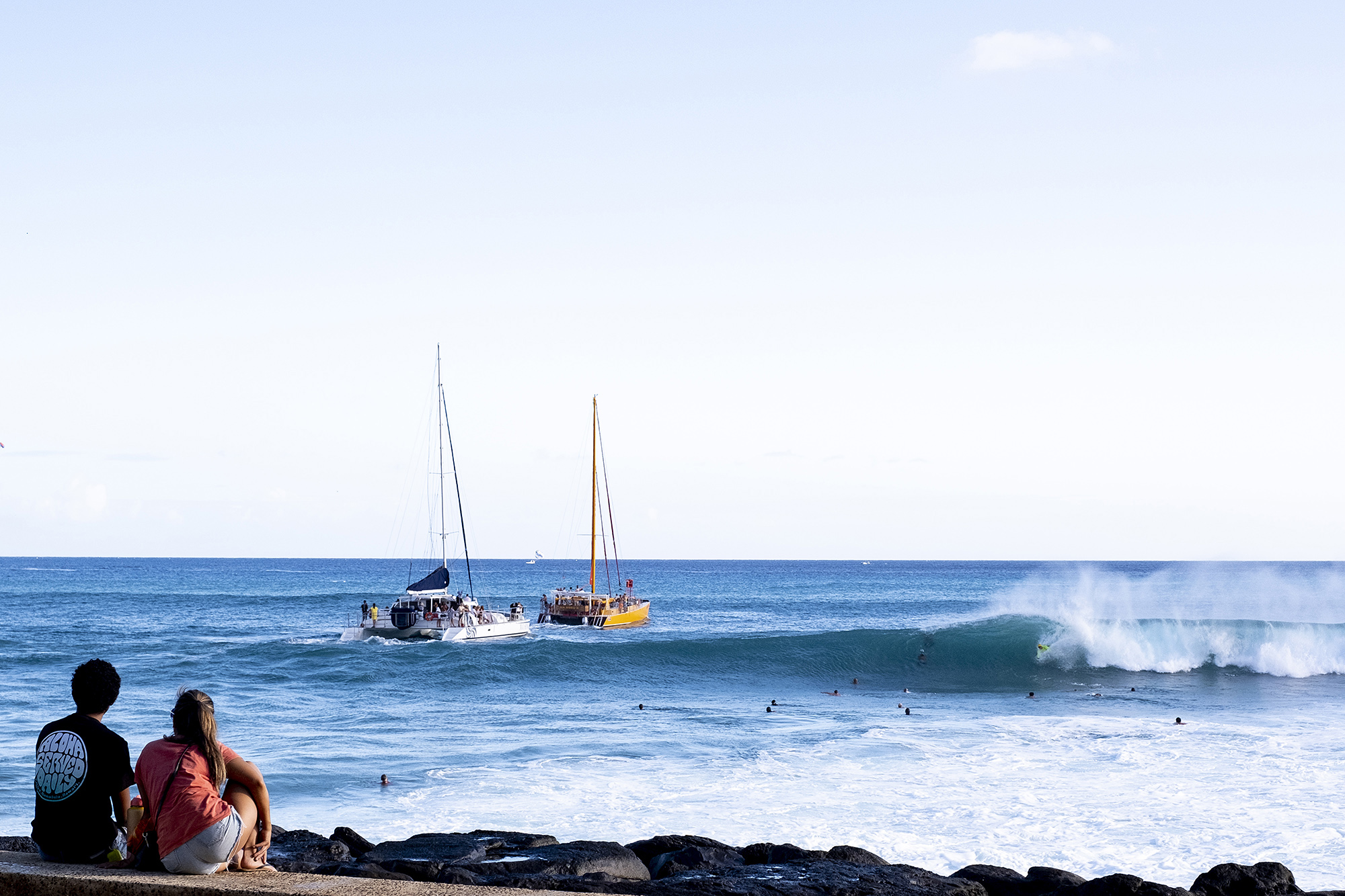 Point Panic, the sickest righthander on all of Oahu…that you’re legally prohibited from board surfing. Photo: Keoki 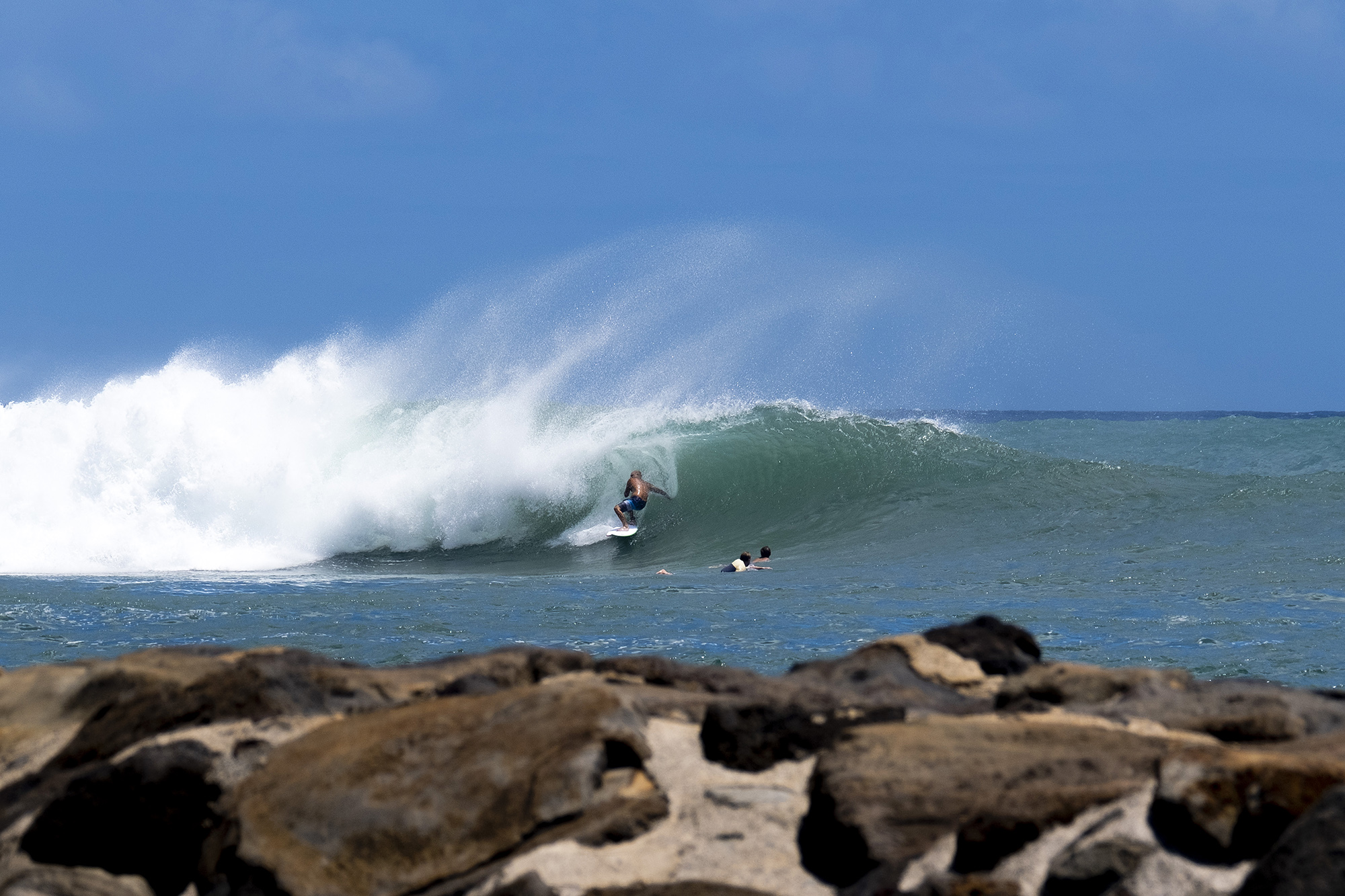 The Man, the Myth, the Uncle: Mike Ho, teaching the keiki how to backside double arm stall at Bowls. Photo: Keoki 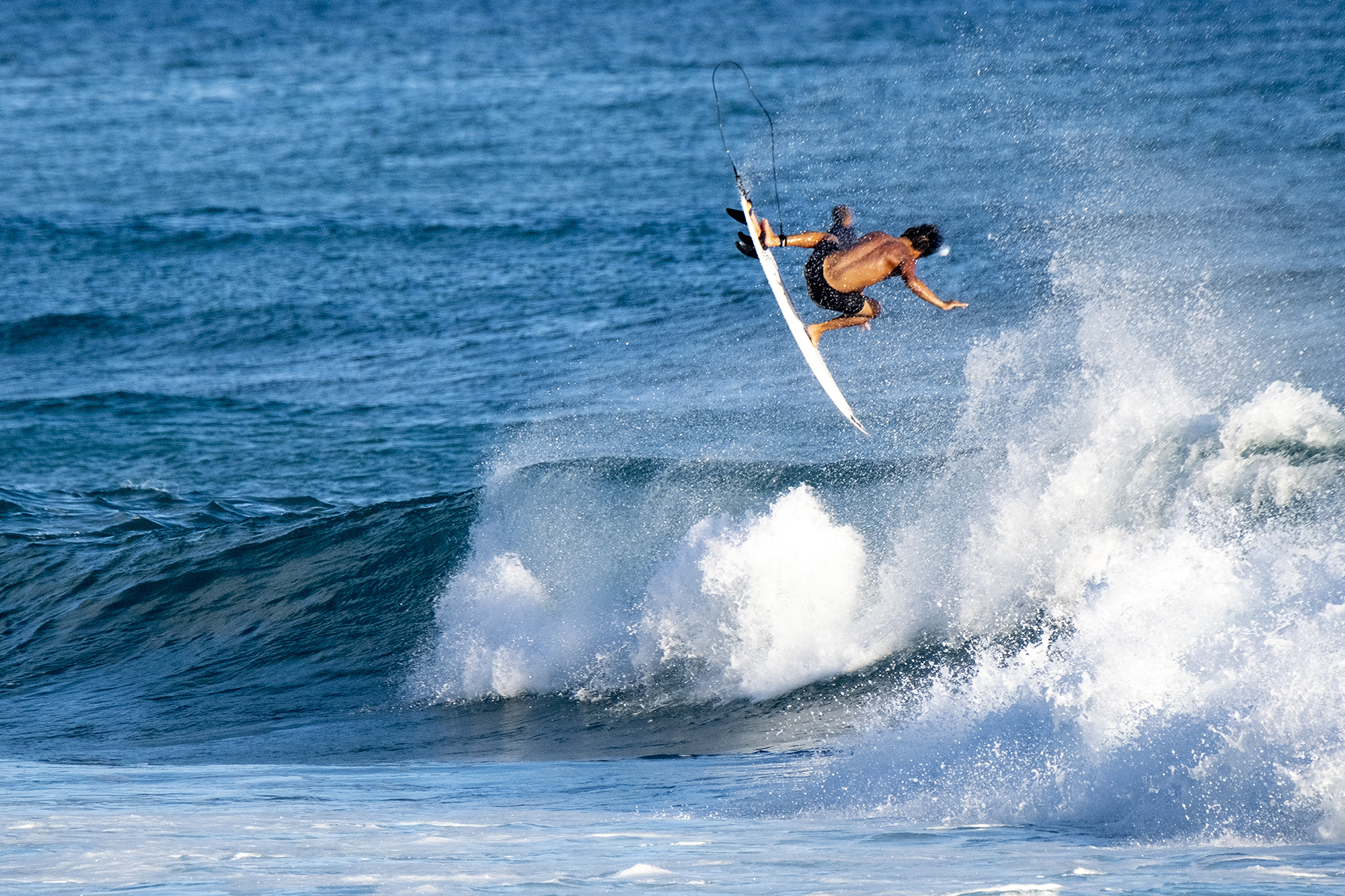 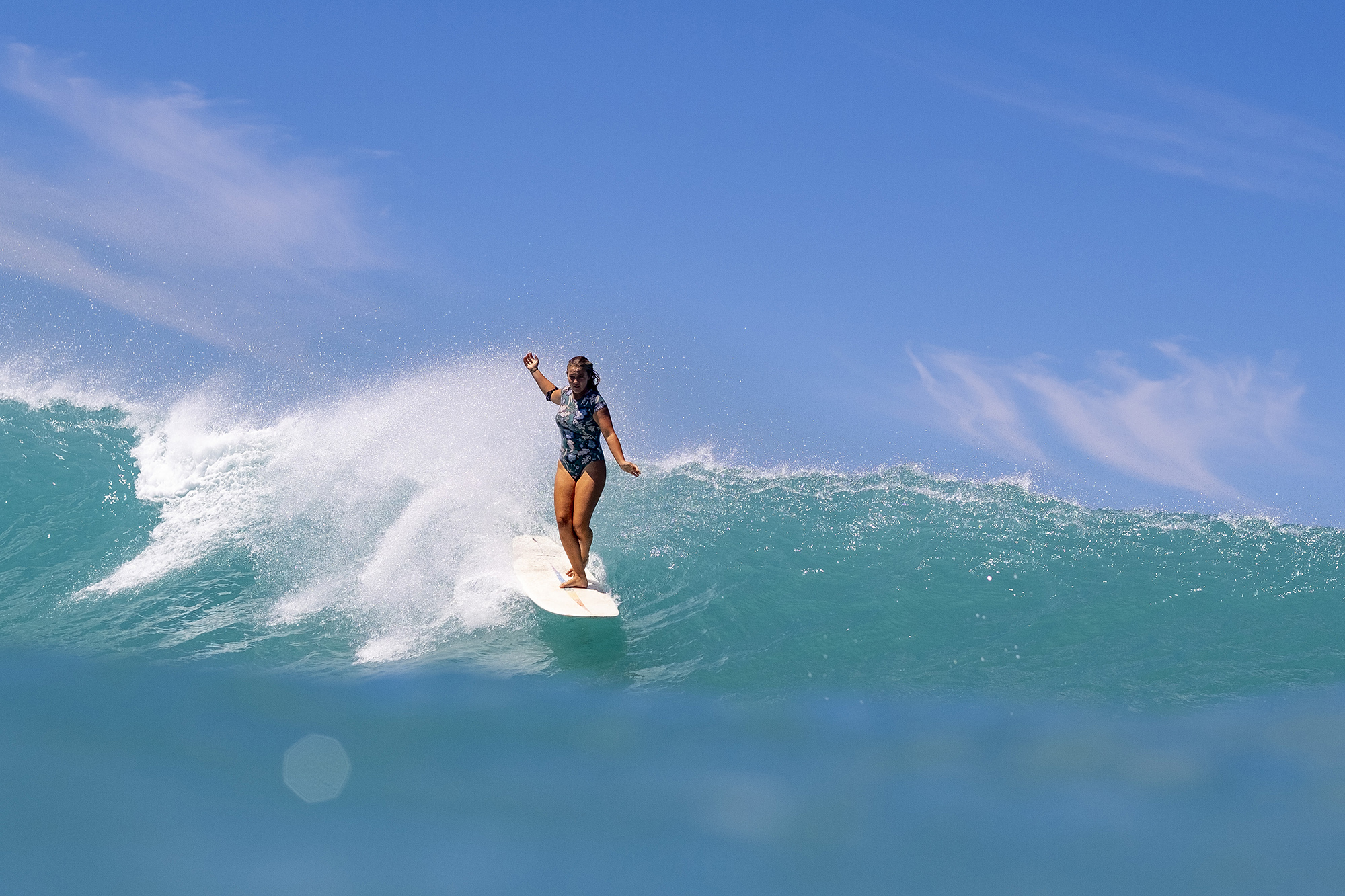 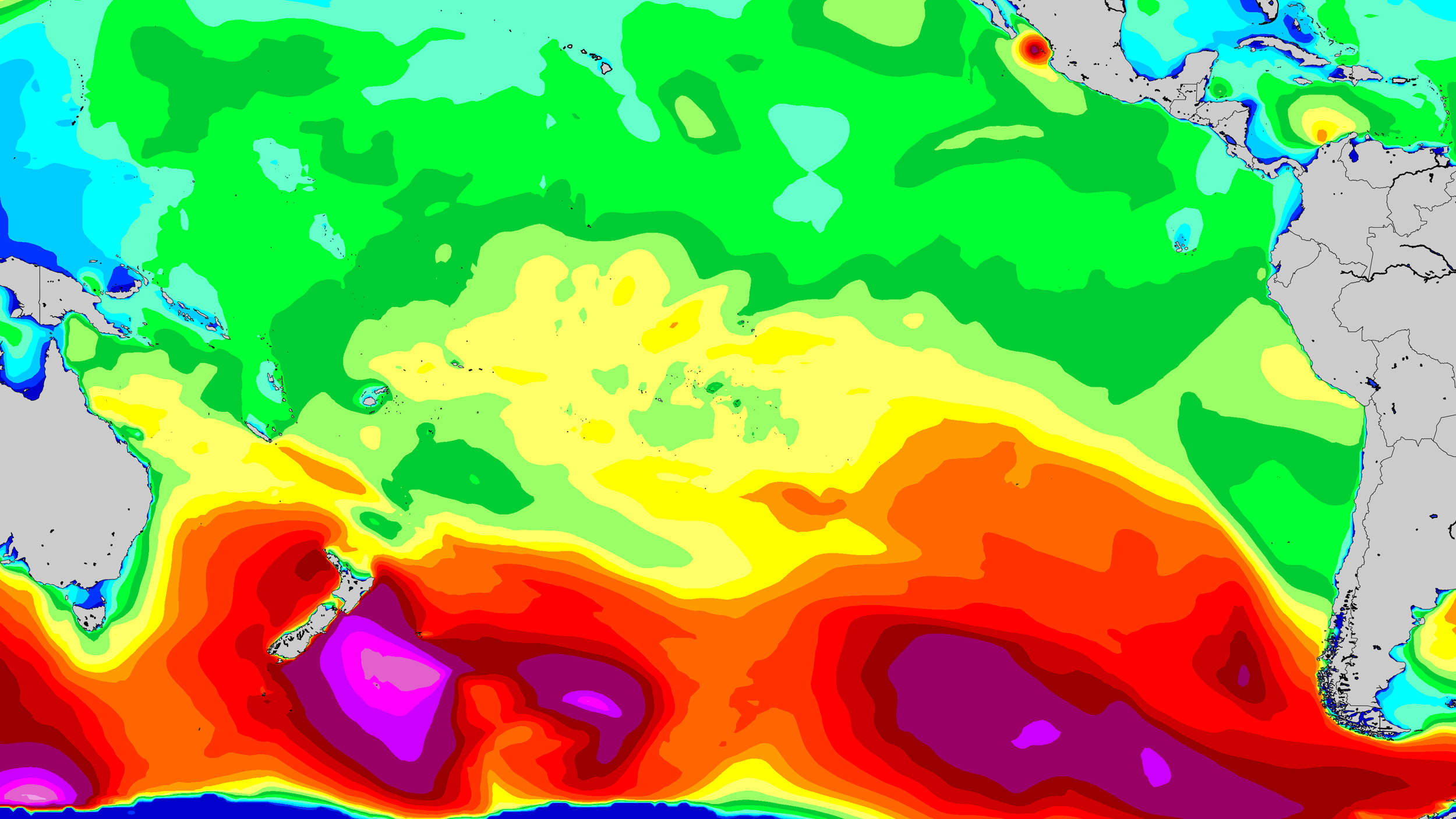 Storm Location and Movement: Strong low pushed out of the Southern Ocean and past New Zealand on an east-northeast track June 28th-July 1st.
Storm Wind: Large area of 30-40 knot wind, with pockets to 50 knots.
Storm Seas: Satellite verified in excess of 40’.
Swell Travel Time: 7-8 days.
Swell Height, Period and Direction: 3-3.5’ at 15-17 seconds from the SSW as recorded on the Barbers Point buoy.

US must outcompete China for a stable relationship: Daniel Russel

Larry Page Has Gone to Fiji and Sold His Superyacht

Toilet paper at a premium again thanks to new lockdown

Your queer Chinese-New Zealand teenage fantasy: How we wrote Yang/Young/杨

Even more of The Mad Butcher’s maddest insta-breakfasts