Ratchet and Clank: Rift Apart is the most fun PS5 game yet

Gaming’s favourite furry-and-robot duo roars back into action with one of the best looking video games of all time, writes Sam Brooks.

One of the saddest pivots in the last generation of gaming has been the slow move from gorgeous, family-friendly platformers towards action-oriented shoot-em-ups. There is pure joy to the simple process of leaping from one platform to another that can’t be matched by the visceral yet numbing gameplay of riddling pixels with bullets. The latter genre also tends to lack the brightness of its predecessor; luminosity dulled down in favour of grit.

Given the way gaming is going, it’s a welcome surprise to discover that, for one of its first high profile releases since launching the PS5, Sony has brought back one of gaming’s most beloved franchises, Ratchet and Clank, and thrown back to the genre that helped make the Playstation great.

The Ratchet and Clank series has stayed true to its core concept since its 2002 debut. You play as Ratchet, a creature called a lombax, aided by your robot sidekick, Clank. Together you go on a journey to save the galaxy from a nefarious (sometimes literally Dr. Nefarious) villain who aims to destroy it. To do this, you jump across platforms, use various gadgets to wipe out assorted goons, and soak in bright colours and zippy music. The pleasures are simple, but deeply felt.

Ratchet and Clank: Rift Apart messes with that core concept by adding a whole other dimension for the action to take place in. During a hero parade where Ratchet and Clank bask in unearned praise – a knowing nod to the middling last few games in the franchise – Dr. Nefarious shows up again with a Dimensionator (as dumb as it sounds) and blows a rift between universes. Ratchet gets sucked into another dimension and shortly runs into another lombax, Rivet. The rest of the game is about the two lombaxes, the only two left in the interdimensions (sure), trying to close the rifts and stop Dr. Nefarious. It’s a silly story, and it’s intended to be: this is meant to be fun to play for anybody of pretty much any age. It’s not meant to be Proust, or even Kojima.

Core gameplay is exactly what you’d expect of a Ratchet and Clank game (and the game basically admits that it’s a throwback to old tropes) but ironically, it ends up feeling especially fresh in an industry that tends to glom onto a new trend, suck it dry, and then move onto the next. The gameplay is very simple, with clear steps up in complexity as you gain more weapons and gadgets. Crucially, it also feels like a progression for the series. The ability to shift between dimensions, immediately jump to certain platforms and dash around on rocket boots might sound like gimmicky additions, but in reality they’re little bursts of excitement that highlight how robust the core gameplay is.

It’s rare that a game is so technically impressive that it draws me in. With the exception of VR, the most obvious improvements in blockbuster video games over the past 20 years have been how they look, rather than how they play. In saying that, Ratchet and Clank has to be one of the best looking games of all time, and is definitely the best looking game I’ve played on the PS5 in its short lifespan.

Games, on the whole, are easier to play than ever, especially these triple-A titles, and developers have been constantly removing barriers to play so that when a player actually picks up a game, it’s ready to go. Those barriers are now as low as they’ve ever been, and it’s clear that Sony, and Insomniac in particular, are leaning hard into making games actually feel as good to play as possible. Which is all to say: Ratchet and Clank is technically impressive, it feels incredible to play, and you come out of it feeling invigorated, not drained. 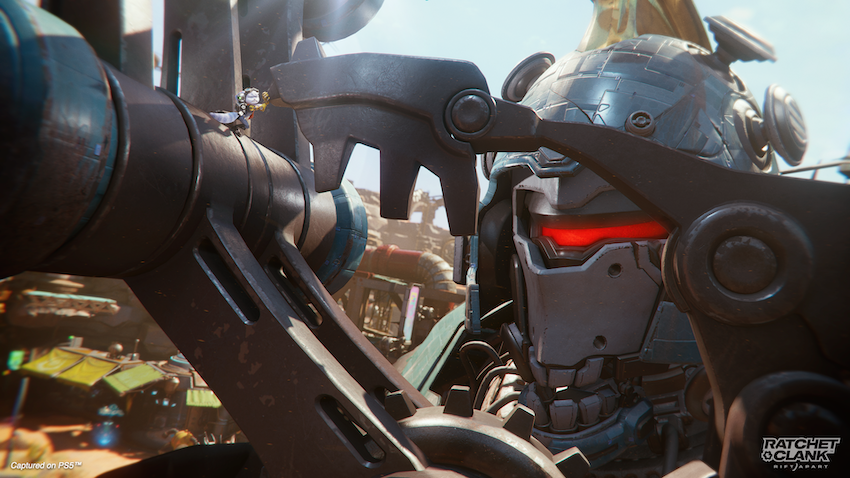 This is largely due to the PS5’s haptic controller. The elevator pitch for haptics? Vibration, but make it fancy. Vibration is not a new thing in gaming, but the PS5 makes it a lot more reactive and frankly, much more visceral. In Ratchet and Clank, there’s the usual vibration tricks – when you’re hit the controller vibrates, when you land especially hard, the controller shakes hard – but this takes it even further. When you’re shooting Ratchet’s guns, the shoulder buttons actually resist you, like a real gun trigger would. When the shoulder button on Ratchet’s Blackstorm gun is pushed down fully, the gun speeds up to fire at full speed. When pressed at half, the gun powers up but does not shoot, thus saving ammo. There’s a range of options like this that, while technically impressive, are even more so for how immersive they make the game. We’re never going to feel like we’re actually Ratchet, but this is as close as we get to getting into his furry paws.

When we’re talking about lowering barriers in video games, we have to talk about accessibility. Bigger studios are really putting their weight behind making their games more accessible, which feels like an obvious choice: if more people can play your game, more people are going to buy your game. Insomniac already made great strides in this area with Spider-Man: Miles Morales, but Rift Apart amps this up even more. There’s the usual options that most games have now – larger subtitles, the option to hold a button rather than rapidly press it – but Insomniac have continued to broaden the options, making this game as easy to play as possible, regardless of impairment. Frankly, speaking as someone who is not very good at games, it’s also just a relief to be able to hit a few toggles and have fun without worrying about it suddenly turning into a grind. (And, of course, if you like your games harder, you can always turn up the difficulty.)

Ratchet and Clank: Rift Apart is a win on pretty much all fronts. It’s an injection of life into a franchise that had started to languish in the face of turning trends. It’s another must-buy for a console that now has had three in its short life. It’s a leap forward for platformers, combining the already satisfying feedback loops of the genre with more immediate, physically satisfying ones. Finally, it’s just a great game, one with almost no barriers to play (provided you have a PS5, which is still not guaranteed). One of the best aspects of this franchise is that it’s an easy pitch: Jump around, hit things, feel good. This entry steps up simply by doing it a lot better.

Ratchet and Clank: Rift Apart is available now on PS5. The game was completed once, on normal difficulty.

Atamira marks 21 years with the opening of Te Wheke

Indonesia bolsters navy as China steps up incursions around ASEAN

How New Zealand plugged the leak on insider trading

Indonesia bolsters navy as China steps up incursions around ASEAN

The Handmaid’s Tale season finale: At last, something to smile about

On the Dawn Raids and apologies – a Polynesian Panther writes

G7 climate decisions are among most important in human history – Attenborough