Jaquie Brown made a name for herself on C4 and Campbell Live. But, for the last decade, she’s been less visible on our screens. Stewart Sowman-Lund wants to know: what’s Jaquie been up to?

Jaquie Brown starts with an apology. “I’m sorry if I don’t say anything remotely funny or entertaining. I feel like I’ve completely lost my sense of humour.” We’re talking, over Zoom, two months into Auckland’s lockdown – and it’s taking its toll. “I feel like a husk, mixed with a slug, mixed with a loaf,” Brown says through a laugh. “The hard thing about lockdown is that the work people like me do, we can’t do. I can’t go into the studio at The Project and that’s really stink. I’m just waiting and trying to remain positive, but it’s not easy.”

For a husk-slug-loaf, the 46-year-old looks remarkably refreshed. Although she admits our interview is the first time she’s put lipstick on since lockdown began and her hair has become unwieldy. That said, her glowing white locks show no sign of regrowth because, as I learn during our chat, the colour is natural. “That’s your exclusive, right there,” Brown jokes.

I’m chatting to Brown a couple of weeks after I wrote a passionate plea for her iconic sitcom The Jaquie Brown Diaries to return to our screens, more than a decade after it aired its final episode. In writing that piece, I realised that while Brown was a regular on TV during the noughties, her appearances since the show concluded in 2009 have been far more sparing. Aside from her weekly stints as the fourth host on The Project, we’ve seen very little from someone who was once one of our most prominent television personalities. I wanted to know why.

The cast of The Jaquie Brown Diaries (Photo: Supplied)

Brown looks shocked when I remind her that Diaries wrapped 12 years ago. “That makes me feel so old,” she says after a pensive pause. The sitcom was her first time acting since high school, she explains, and the enormity of being given such a big platform hit her hard at first. She had no idea if it would work or not. “Comedy TV in New Zealand wasn’t really celebrated at that particular point. I think Flight of the Conchords had just started to make a splash in the States,” she says.

Ultimately it did work out, winning rave reviews – and awards – for its writing and performances. Many of the show’s funniest moments drew from Brown’s own life. A scene in the first episode of a gynaecologist recognising her from TV while looking between her legs really happened, as did a tense interview with a big name rapper. And: “I still get called Jackie Clarke to this day.”

The Jaquie Brown Diaries ended after just 14 episodes, finishing with a “to be continued”, the promise of a resolution to its cliffhanger, and a legion of devoted fans.

Not long after the show stopped airing, Brown slipped somewhat out of the public eye – at least when compared to her early career. She was once a fixture of New Zealand TV on the now defunct C4 and carved out a niche for herself as a light entertainment reporter on Campbell Live. “It’s taken me quite a long time to get over playing myself in a show. Sometimes you forget who you are and other people forget who you are,” says Brown, who felt the need to “prove” that she was far nicer than her narcissistic and fame-hungry on-screen persona. “That was a real concern of mine, back then. Now I’m like ‘think what you like!’.” 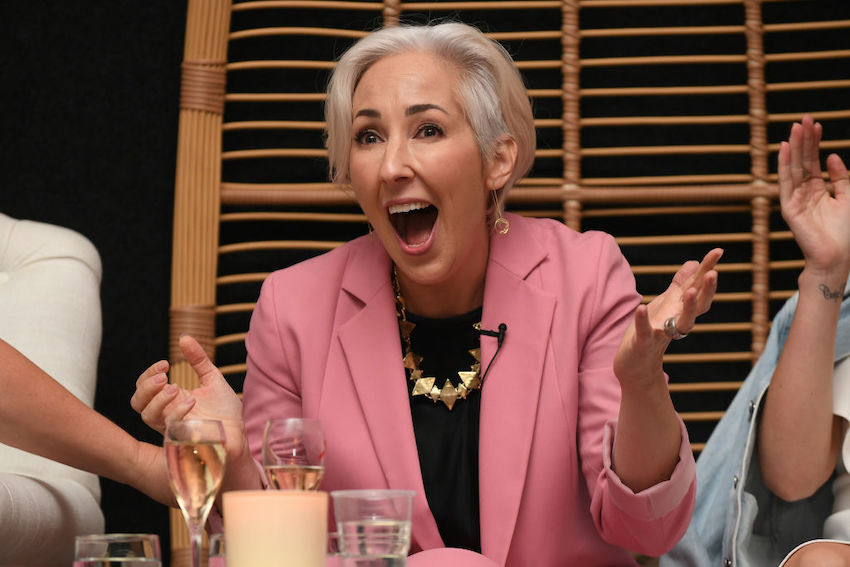 Moving out of the limelight was, Brown explains, a conscious decision. “I wanted to take a step back and be a little bit more private. You’re so exposed when you’re an on-screen personality,” she says. “There are elements of being on TV I like, but I am quite a private person and a quiet person. I like to recharge my batteries alone.” Brown says she’ll now often turn down invites and has eschewed the well-trodden route of pivoting from broadcasting into influencing. You’re far more likely to see her sharing personal moments from her life on social media than discount codes. “I’m not out there building my Instagram followers or trying to get free soap,” Brown says. “There was definitely a time there where I was doing that kind of stuff; you think ‘oh, I’m a known person, I should probably do that’, but actually it made me feel uncomfortable. That was quite a revelation for me – to be able to say no.”

Her main work now is as a screenwriter and she’s currently working on a couple of projects under way in Los Angeles – although she wouldn’t turn down the right presenting gig. Having children ultimately changed her motivation to be in front of the camera. “I didn’t feel funny or intelligent, or that I’d kept up with anything. It was a bit like the lockdown version of me. Kind of meh. I think I lost a lot of confidence,” she says. “When you’re not doing the thing that you’ve done for a long time you do lose a lot of confidence in your ability to do it. But also my thirst or drive to be in front of the camera wasn’t there.”

Brown, who looks like she’s never really contemplated this before, says it’s “weird” she feels this way considering how much time she spent in front of a camera for so many years. “I’m not an opinion giver, and I’m quite comfortable with that.”

Selfishly, I couldn’t resist the opportunity to try to glean any details from Brown about the finale to her sitcom that never was. The show was always meant to have a conclusion, she says, following the British model of “two seasons and a special”. But, she says, “This is probably the most depressing answer to give you – I can’t actually remember why it ended.” She suspects money may have been the issue. “I think the idea we were pitching was a one-off special but the network wanted another season.” Despite my best efforts, neither Brown nor the show’s writer/director Gerard Johnstone would spill what would have been in store for that follow-up special. “I never got as far as writing a script, but there’s a treatment for it somewhere,” says Johnstone, who’s now based in Los Angeles. “I believe it was titled ’The Brown Ultimatum’.”

Both, however, said they would be up for returning to the show if the opportunity came up. But Brown makes it clear that nothing is in the works yet. “I’m more at peace just doing quiet things away from the camera,” she says.”I’m not turning my back on presenting or acting, because I still do enjoy them a lot, but I’ve learnt a lot about myself through writing. That’s where my passion is: you can give so much of yourself on the page and it’s sort of meditative. That’s really what I enjoy doing.”