Drag Race Down Under power rankings: All white is not all right

The third episode of RuPaul’s Drag Race Down Under sends home the only remaining queen of colour, and it’s not OK.

Let’s start with some truth: Drag Race has had a race issue since the very start.

Queens of colour have a harder time on the show, they are disproportionately bullied by fans on social media, and they tend to have fewer followers on social media after the show than their white counterparts.

This has been known for a while, and there’s been extensive reporting and commentary about it, including outcry from the queens themselves. That’s why it’s so disappointing to see that the first, and hopefully not last, season of Down Under sent Coco Jumbo home in episode three, and heads into the back five episodes with a cast whiter than a sheet of A4.

This isn’t about the individual queens, though I would’ve happily seen more of both Jojo Zaho and Coco Jumbo. This week in particular, Coco showed herself not to be up to the musical challenge, and her look was barely on theme. No, it’s an issue with production and casting, or more to the point, it’s a failure of production and casting. The cast shouldn’t look like this, and it stings especially in a season where two of the queens had to deal with racist controversies before episodes even aired.

If you’re casting the historic first season of Drag Race Down Under and you come up with ten white queens and two queens of colour, you’re not looking hard enough. You could fill this entire show with contestants of colour, without even looking especially hard: Medulla Oblongata. Buckwheat. Trinity Ice. Felicia Foxx. MadB. Timberlina. Tess Tickle. Shaniqua TiwiSista. Lasey Dunaman. Bailey Legal. Zodiac. Cindy of Samoa. Bionica. All worthy contestants, and very easy to look up for curious producers on that little used thing known as “the internet”.

If you’re about to cry “affirmative action!”, facetiously ask “so there should be a quota, then?”, or say “well, maybe none of them were good enough”, you should close this tab, go read a book and walk children in nature. It’s not about any of those things. It’s about making a more interesting, compelling show. One of the reason for these spin-offs is to give an insight into both the drag scene and the queer culture of the nations that host them. By losing the only queens of colour in the show, we’re losing a lot of what makes Drag Race special.

And if you’re still crying caucasian foul, I’ll put it simply for you: The cast of Drag Race should never look like the cast of Friends.

Let’s get to the episode, though.

We start with bizarre Baywatch themed mini-challenge, followed by a brief appearance from popstar Troye Sivan – who said “raw dog bottom bitch” on our public broadcaster for the first time since Judy Bailey said it on the 6pm news back in the 90s – and “Drag Race composer” Leland, and that job title is a Hester Prynne-esque scarlet letter if I’ve ever seen one.

The musical challenges make for great TV, but my lord, these queens are not set up to succeed with ‘Queens Down Under’, a song that couldn’t sound worse if you opened GarageBand on your computer, hit record, threw the computer down the stairs and pressed play on the result.

Anyway, the queens split into two teams to record verses of varying quality, learn choreography with varying success, and perform cute little numbers onstage. As always, the queens who aren’t suited to it flounder – Maxi Shields and Coco Jumbo in this instance – while others take to it like gay ducks to queer water.

Tie your goon to the clothesline, because the runway theme this week is “bogan prom realness”, and the queens bring their best Kath and/or Kim to the party. Elektra and Coco end up in the bottom – the former for a basic look and some choreography missteps, the latter for a similarly basic look and just plain not being able to sing – and give a genuinely killer lip-sync to Peaches and Herb’s ‘Shake Your Groove Thing’. Elektra pulls out the splits (again), Coco pulls out the attitude, but it’s Elektra who stays … and we know how I feel about that.

Onto the rankings, swiftly. 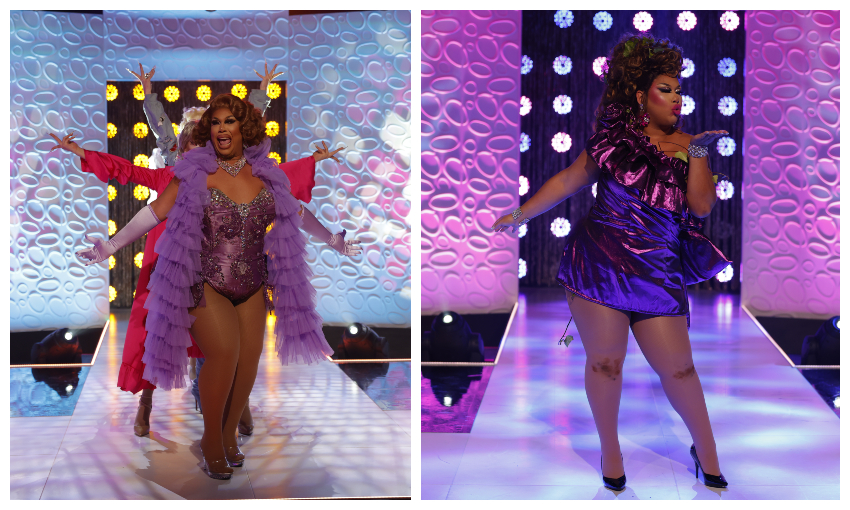 I’ve said my spiel up above about this, but it sucks to see Coco go. She clearly had a lot to give the competition, but her decision to sing her verse (despite not being a singer) and missing the runway theme secured her spot in the bottom.

I would’ve give her the win in the lip-sync personally – more on that below – and I think the competition will miss the fucks she refuses to give when other queens are shaken. Like at a bizarre note, potentially from last week’s eliminated queen Art Simone, that reads “WATCH OUT!” in all caps. To slightly misquote the legendary words of one-hit wonder Mr. President: “Ya, ya, ya, coco jumbo, ya, ya, ya.” 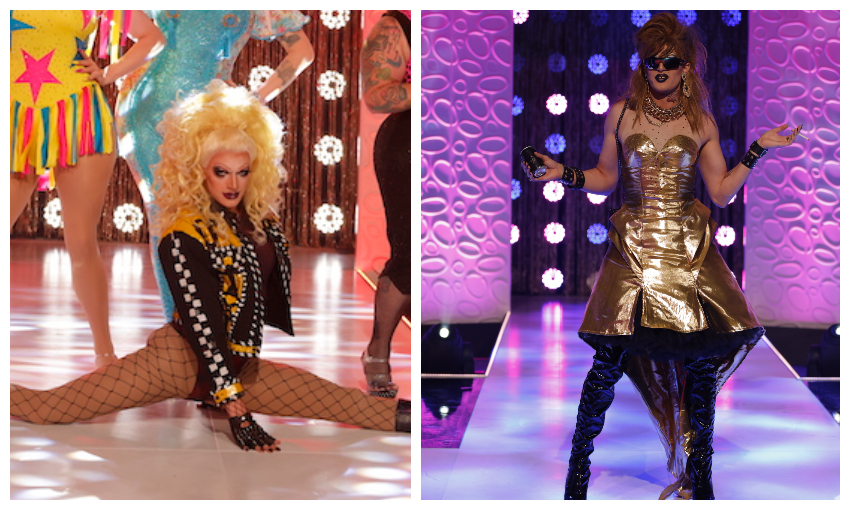 Oh, man. I really feel for Elektra Shock on one level. She has a really raw, vulnerable confessional where she talks about losing her dance studio – this competition means a lot to her and it’s clear that she is a tremendously talented dancer.

However, her looks are just not where they need to be to stay in the competition. All four have been more than a bit off-theme, and lacking the kind of high concepts that the successful queens have had. Drag doesn’t have to be expensive (though money helps) but there has to be an immediately recognisable character and some sort of awe factor. Elektra’s looks don’t fit her or the themes especially well, and she ends up having to sell something that nobody wants to buy.

This means that she has to fall back on her dancing, but even that gets dinged in the challenge. She takes the most complex choreography in her routine, and ends up showboating where she should be uplifting the rest of her group, who fade in comparison. We know Elektra can dance – we’ve seen more splits from her than we’ve seen episodes this season – but the drag needs to rise to meet the dancer, and fast. Oh, Maxi. You can’t sing and you can’t dance, but you’re absolutely delightful. People want to watch you, and while talent is the important part of the charisma, uniqueness, nerve and talent acronym, if you’ve got the first three in spades, we’ll let you off on the fourth.

I will give one note, which is irrelevant given that the season has long finished filming, but contestants know there is going to be a musical challenge on Drag Race, just like they know there’s going to be a Snatch Game and at least one sewing challenge. Take a singing lesson! Or at least figure out how to weaponise your lack of singing ability in a way that makes us nod our head.

How do you expect to win Drag Race if you don’t have the keys to the car? Talent can only jimmy the lock so many times. Typically strong work from the queen I still consider the frontrunner. She might not be the best at anything in this challenge, but she had fun with another look that perfectly blended the comedic and the editorial. I never thought I’d use the phrase “denim chic” but here we are! One thing that I love about Anita is that she could very easily be the quirky queen of the season, bringing character but not necessarily honed glamour. However every one of her looks is on-point and on-theme, but could still work in any other context. She’s the whole package, and has yet to stumble in the competition, just like her Caluzzi counterpart… God, Kita absolutely kills this episode. The judges respond to her joyfully manic energy well, and while her look mightn’t be quite on-theme, it’s absolutely gorgeous and her musical performance is absolutely radiant. It’s a very good thing that Kita’s energy transfers to screen, because she’s absolutely magnetic onstage, and is equally so here. Another strong showing! 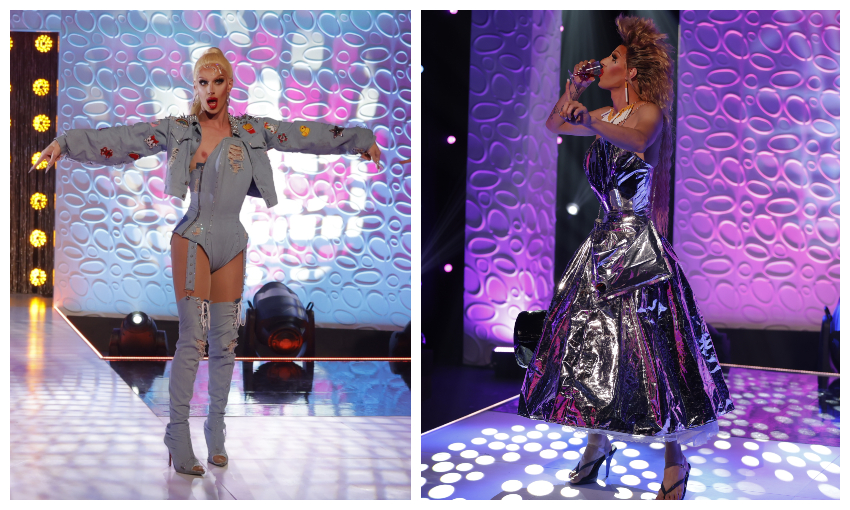 Some episodes have disputed winners, some have controversial ones, and some have a clear number one. It was Anita’s week last week, it’s Scarlet’s this week.

Scarlet Adams gives maybe my favourite look of the season so far – goon sack by way of Galliano, which includes an actual goon sack as a purse! – and she’s clearly an immensely talented dancer who took the time and care to make sure the rest of her group looked as good as her. No notes, hope she keeps on killing it!

RuPaul’s Drag Race Down Under airs on TVNZ2 at 8:30pm on Saturdays, and drops on TVNZ on Demand earlier that night.