Four hundred seventy-five kilometres off the southern coast of the South Island lie the seven uninhabited islands known collectively as the Auckland Islands. While they have strong historic cultural and spiritual significance to Ngāi Tahu, the Auckland Islands are, in general, visited only by biologists and conservation workers. Still, one of the seven – the tiny Disappointment Island – has managed to take the internet by storm

If you’re not a local, you may have first come across Disappointment Island via Snapchat; in recent years it’s become a popular place to locate yourself on the social media platform’s Snap Map. After all, why say you’re at home, when you could claim to be hanging out on a South Pacific island with a hilariously ironic name? As the island’s notoriety has grown, so have the memes. From traditional image memes on Instagram and Facebook, to reviews on Google, to videos on TikTok and Youtube racking up millions of views, Disappointment Island has became an internet culture favourite. One fan even took the meme a step further getting the island tattooed on their neck for the world to see.

While many have heard of the island, no one seems to know how it got its name and why, exactly, it is so disappointing. Still, there’s been plenty of speculation as to the origin of the name. The lack of resources on the island. The number of shipwrecks off its coast. Some think it was named after the Îles du Désappointement, a group of islands in French Polynesia. So what’s the truth? The island’s fascinating history may provide some clues.

Disappointment Island is a 566 hectare scrap of land with a a rugged coastline, thick tussock and zero trees. An internationally recognised and protected seabird habitat, the island is home to over 100,000 white-capped mollyhawk, a type of albatross, which represents 95% of their total population. Its teeming bird life also includes the tiny Auckland Island rail, which was believed extinct until it was rediscovered on nearby Adams Island in 1966.

But there’s more to this island than just a lot of birds. Over the years, Disappointment Island and its neighbours have been the site of a number of shipwrecks resulting in loss of life and rumours of buried treasure in the waters below. The first known shipwreck in the Auckland Islands came in January 1864, a month after the Grafton, a 56-ton schooner, left Sydney for the Campbell Islands. On its homeward journey the ship hit heavy winds and was pulled off course towards the Auckland Islands, where it hit a rocky cove and was destroyed. The five men aboard were able to make it to Auckland Island, the main island in the group, where they waited for close to a year to be rescued. The men lived on wild pigs, birds and fish, and even managed to make “passable beer” out of a root found on the island. Eventually, it being apparent that no rescue was on its way, three of the men set out in a dinghy and managed to sail the 450km journey to Rakiura/Stewart Island. It is possible that they passed Disappointment Island en-route and stopped to look for resources and help – only to be disappointed. At Stewart Island, however, they were able to find help, and eventually funds were raised for a rescue mission for the two remaining sailors. A few months after the wreck of the Grafton, the Invercauld, a 1000 ton shipping vessel, met the same fate, being swept into the Auckland Islands en-route to Peru from Melbourne. The ship hit the cliffs off the coast of Auckland Island on the 11th May 1864 and was destroyed. Nineteen of the 25 crew members made it to shore with supplies, but they ran out of food and water within a few days. In desperation, the men climbed the 600-metre cliffs above the shore and trekked through the bush, making it to Port Ross at the far north of the island. Incredibly, the Invercauld men were unaware that the Grafton wreck had occurred just months before at the opposite end of the island, and that its survivors were still stranded there. The following months were challenging for the Invercauld’s 19 survivors, only three of whom ultimately survived. As Don Rowe recounts in his recent feature on the Grafton and Invercauld shipwrecks for NZ Geographic, two of the men, Fred Hawser and William Harvey, got in a fight one night that resulted in Harvey kicking Hawser out of their shelter and into cold.

“In the morning, the frozen earth proved impossible to excavate, and Hawser’s corpse was interred beneath a pile of boughs,” writes Rowe.

With food in painfully short supply, desperation took hold. According to Robert Holding, one of the few survivors of the wreck, a few days after Hawser’s body was discovered, “the mate and myself found that Harvey had been eating some of Fritz.”

The three Invercauld survivors were eventually found and rescued in May 1865 by the Portuguese ship Julian – unwittingly leaving behind the Grafton men at the other end of the island. 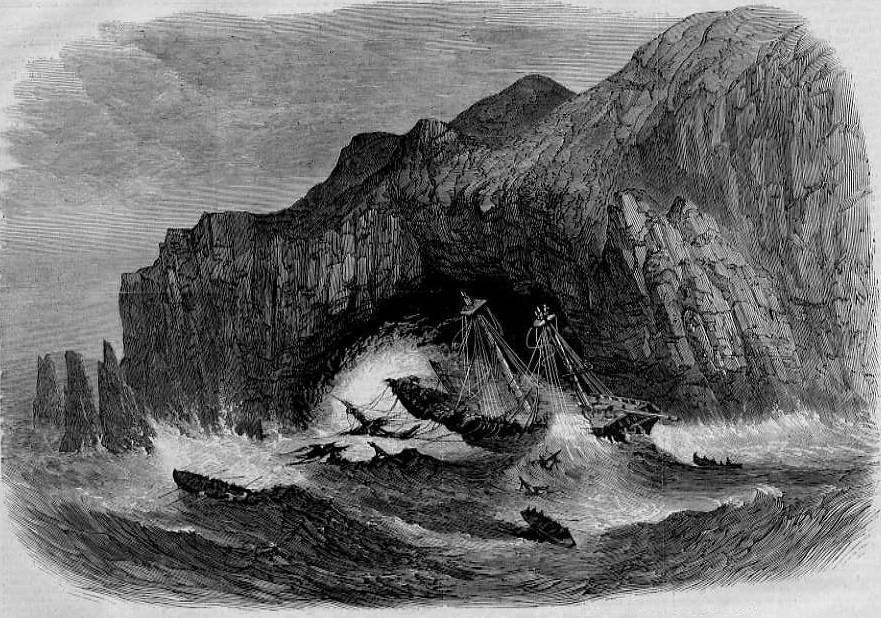 Still the shipwrecks continued. In 1866 the American ship General Grant crashed into the cliffs off Disappointment Island during a violent storm. Of the 83 on board, 68 drowned. Only 15 managed to board smaller boats and escape to shores of Disappointment Island, where they slept overnight. Once they realised there was nothing of use there, they sailed to Port Ross on the main island, where they lived for the next nine months. Eventually, their distress signal was seen, and the men, of whom only 10 ultimately survived, were rescued.

As a result of the growing number of shipwrecks, the New Zealand government built a network of Castaway Depots, including a number on the Auckland Islands. These huts were stocked with essential supplies, giving those stranded on the islands a chance of survival – and even, when the refill ship arrived every six months or so, of rescue. 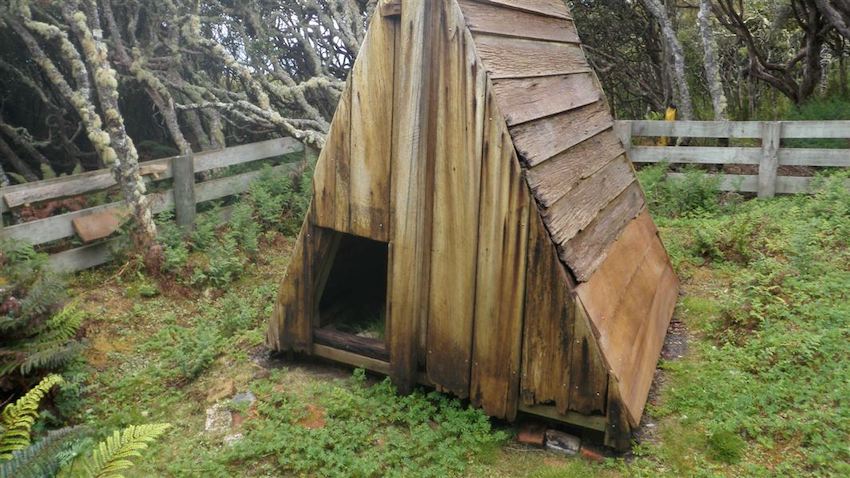 Built in 1880, Stella Hut on Enderby Island in the Auckland Islands is the earliest surviving and most complete of the original castaway depots still standing (Photo: J Hiscock / DoC / CC BY-SA)

These depots as they would soon prove a life saver. In February 1907, the 2200 ton Dundonald left Sydney en route to England with a cargo of wheat and gold, and 83 men on board. Things went wrong right from the start, with gale winds pushing the ship off course. Its compass began to act erratically, sending the ship further off course and into the Auckland Islands’ path. On March 7, the Dundonald sank after running ashore on Disappointment Island’s west coast. Twelve people drowned; for the next seven months, the remaining men kept themselves alive on the inhospitable island. It wasn’t easy. Other than birds and fish, which first needed to be caught, the only other faintly edible stuff was stilbocarpa, or Macquarie Island cabbage, a plant with large, rhubarb-like leaves. With no wood to construct shelter, many of the men slept in holes dug in the earth. Also, it was almost always raining.

After seven months, the survivors were willing to risk it all to escape Disappointment Island. They managed to build a small boat and sail to Auckland Island, seven kilometres away, then trekked 15 kilometres to the Castaway Depot on the opposite coast. There they were able to get meat, biscuits, clothes and other supplies that lasted them the six weeks until the next drop off – and the chance of rescue – arrived. The 15 men were taken to Bluff and some time later, the shipwreck was located. However the more than 70 kgs of gold (valued at roughly NZ$316 million in today’s money) that it was carrying has never been recovered.

Whoever eventually finds the Dundonald treasure will clearly be anything but disappointed, but for bird lovers, the island is already misnamed. Bird expert Colin Miskelly visited Disappointment Island in 2018 and decided that “few places on the planet with a more inappropriate name”. Miskelly believes the island got its name from explorers looking for safe harbour, freshwater, wood, and food and were left disappointed. These days few people ever visit the island; since the Dundonald wreck, only 10 people are known to have camped there, including the four people in Miskelly’s crew.

Whatever its origins, we should be glad that someone came up with such a pessimistic name for this tiny subantarctic island. The name that has become a meme has kept Disappointment Island on the map – and given us all a reason to discover its fascinating seafaring history.

Transformation and progressive ghosts | The Spinoff

‘Pharmac underfunded, Māori die, Labour pats itself on the back’ – patient advocate

Dreamy island escapes as pretty as the Maldives​ – Times of India