in South Pacific Islands
Reading Time: 5min read
A A

Chad and Carolyn Carvey, and their dog Spinakker, started out in August 2019 and plan to spend ten years sailing around the world (Corinne Smith/KHNS)

A California couple is spending ten years sailing around the world. This is their second year of the voyage, and they stopped in Haines over the holidays to visit family. KHNS’ Corinne Smith caught up with them at the harbor this past weekend.

The 43-foot sailboat ‘Walk On’ is easy to spot in the Haines harbor with  Christmas lights strung up the mast and backstay. Chad and Carolyn Carvey are in Haines visiting his cousins, artists John and Sharon Svenson.

It’s an unusually cold January day. Temperatures are in the single digits. Inside the boat, it’s cozy, with throw pillows and holiday decorations strung up across windows, and an exuberant Wheaton terrier named Spinnaker is underfoot. Carolyn is making tea, Chad says they’ve just refueled and are preparing for a departure when there’s a break in the weather, headed south. 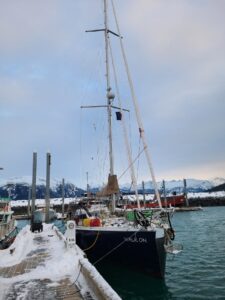 “Everybody said, ‘you’re voyaging in winter in Alaska? Nobody does that,’” Chad Carvey said. “And we just found if you’re patient, and don’t push it, and just go when the weathers good. Like, the weather is nasty today, nasty tomorrow, but Monday’s supposed to be fine to get to Juneau.”

The Carveys are spending ten years sailing around the world. This is year two of the voyage. They started in the San Francisco Bay Area in California, where they both began sailing.

“I was a school principal for 29 years. And so when I was a teacher, I used to tell my high school students that they needed to have a dream goal, something to really reach for,” he said. “And I figured I better have one, and I thought about what I wanted to do in my life, and I wanted to sail around the world. And when I met Carolyn, and she had the same kind of adventurous spirit, it became our dream together.”

Carolyn Carvey is a graphic designer and started sailing on the bay in her free time.

“Prior to meeting Chad, I had taken some women’s sailing classes. So I was already getting into that, and then a good friend of mine was a captain and taught classes and her husband was building a vessel and everything. I really got into sailing,” Carolyn Carvey said. “Chad and I met and then we started taking courses together.”

They say they’ve been preparing for the past roughly 18 years, and finally set sail in August 2019.

They first headed up the Pacific coast.  They say the Oregon coast was stormy but getting up to Washington and the San Juan Islands was what they’d dreamed of. They’d reached the waters of British Columbia near Vancouver when the pandemic hit and borders started closing. That turned out to be a blessing in disguise.

“We got to explore the whole of that coast, because we were kind of like a Canadian boat,” Chad Carvey said. “They treated us like a Canadian boat, whereas all the other American boats had to just either not go in, or just zoom right through. And so we had a beautiful experience of just the wilderness all to ourselves in the summer.”

Fortunately, during the pandemic they were able to move their business remotely. The Carveys work as a team fundraising for nonprofits – he’s an auctioneer and she is the visual designer and business manager – which moved to organizing virtual galas during the pandemic.

Chad Carvey says when they reached Southeast Alaska, they were struck by the wilderness and incredible beauty.

The winter has been challenging with storms and freezing gear, but they say patience is key. Their sailboat has solar and wind power, a water filtration system and a generator for the colder temperatures Alaska winter. Chad says they’re able to be self-sufficient for up to three months.

Carolyn Carvey says they were also struck by the small town hospitality.

“To be apart from all the cities, and really see what’s really important in life,” she said. “You know, the people that you meet, and you really get to meet them. It’s not just, uh, you know, surface stuff. Yeah, you really get to know them.”

“We love it here. And we’re actually going to buy property when we’re done sailing around the world, we’ll come back here to live,” Chad Carvey said.

The plan now is to sail south, across the South Pacific and east around the world. Then, back to Alaska where they plan to buy a home on Kupreanof Island, near Petersburg. And they also hope to have a vacation cabin in Haines near their family.

“This is a dream come true. And when you have a dream, you never know how it’s gonna turn out,” Chad Carvey said. “Some people have had dreams about cruising for decades, and then they started the I don’t really like this. So for us, we have lived aboard our boats kind of 16 of the last 18 years, and we did enough voyaging to really know we loved it. And we love being together. As a couple you have to work stuff out, because you don’t have personal, you know, space. So the fact that it was not just everything we planned and dreamed, but it was better. It’s better!”

Now that the dream has a new final destination in Alaska, they’re heading south to continue the journey.

Coronavirus: What’s happening in Canada and around the world on Friday

In 2022, India should keep an eye on Indo-Pacific

Building islands of trust, not tension

Back to the start: 99-year-old veteran Guy Dill returns to Pearl Harbor for 80th anniversary of attack

In 2022, India should keep an eye on Indo-Pacific

‘Omicron has entered our whare’